The Young and the Restless Spoilers: Sharon and Adam’s Intense Bond Grows After Memory Recovery – Will Shey Lose Out to Shadam?

BY Heather Hughes on May 19, 2019 | Comments: Leave Comments
Related : Soap Opera, Spoiler, Television, The Young and the Restless 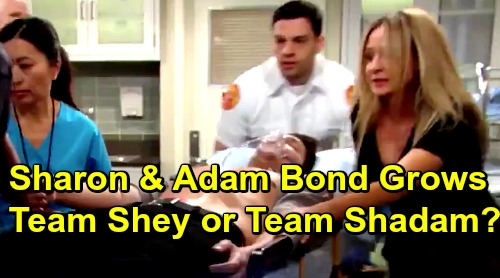 The Young and the Restless (Y&R) spoilers tease that Sharon Newman (Sharon Case) will soon have another reason to be drawn to Adam Newman (Mark Grossman). She felt a familiar bond from the moment she saw him again, and it’s been steadily growing. Sharon had a very intense relationship with Adam once upon a time. She credits Adam with saving her life, so they’re always going to be connected.

During the week of May 20-24, Adam will recover from a bullet thanks to a mysterious shooter. He’ll be rushed to the hospital with a gunshot wound after Sharon finds him bleeding on the floor. Adam was only just found in Vegas, so Sharon certainly won’t want him to die. It would be heartbreaking for Adam to truly lose his life this time, but that thankfully won’t happen.

Adam’s ordeal will pull Sharon closer than ever, especially when his memories come flooding back. He’ll awaken in the hospital to find that he recalls his whole life – the good, the bad and the ugly. Of course, Nick Newman (Joshua Morrow) won’t be so sure Adam is telling the truth. He’ll wonder if Adam faked his miraculous memory recovery along with the amnesia that came before it.

That’s an option to consider, particularly if the shooter was in on this and they’re carrying out a scheme against the Newmans. However, that’s still an unknown at this point and won’t affect how Sharon feels. She’ll fully believe Adam fought through that memory barrier and came back to his loved ones. Sharon should be thrilled when Adam finally remembers their history and love they used to share.

You can bet Adam will thank Sharon for believing in him and showing him kindness when he needed it most. Sharon will continue to do that for Adam while he settles back into his old life. As Adam spars with Nick and other Y&R characters, The Young and the Restless spoilers say he may keep using Sharon as a confidant.

Rey Rosales (Jordi Vilasuso) probably won’t be too happy about that! He supported Sharon’s efforts to help Adam, but he may feel like her work is done. This could lead to some “Shey” conflict and an even deeper “Shadam” connection. Sharon could easily face some big shakeups in her love life!