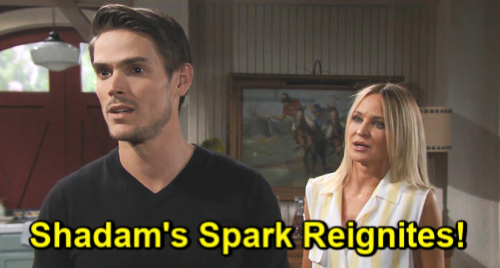 The Young and the Restless (Y&R) spoilers tease that Sharon Newman (Sharon Case) will continue to feel sorry for Adam Newman (Mark Grossman). Adam’s had a rough time since the explosion, and Sharon truly believes he wants to rebuild his life.

She won’t approve of some of the things Adam does in the coming weeks, but that won’t stop her from thinking there’s a good heart underneath his strategies.

Of course, Nick Newman (Joshua Morrow) and Rey Rosales (Jordi Vilasuso) will believe Sharon’s being manipulated. That may be partially true, depending on how Adam’s plans work out.

We have no doubt Adam will exploit his bond with Sharon if need be. She’s pretty much the only one in town Adam can trust, so he knows he has to nurture that connection and keep her in his corner.

However, there’ll be another reason for Adam to keep Sharon close. We can’t just brush off that steamy dream Adam had about her. Adam insisted he loved Chelsea Newman (Melissa Claire Egan) in that dream, but Sharon piped up that maybe he loves them both.

Y&R fans know there’s lingering love on Sharon’s end, too. She’ll never forget the intense relationship she once had with Adam. The Young and the Restless let Sharon play a huge role in reintroducing Adam to the canvas. They undoubtedly did that with a goal in mind. Adam and Sharon’s friendship could become quite complicated soon enough.

Old Flames Will Start To Flicker

During the week of June 17-21, the “Shadam” spark will reignite. There’s a good chance it won’t be in anyone’s dream this time around. Sharon and Adam may not go straight to sex, but that could certainly be coming later. They could start with a passionate kiss and let temptation build for a while.

At some point, Adam and Sharon may not be able to resist that temptation. The Young and the Restless spoilers say a “Shadam” chemistry blast is brewing, so “Shey” may be in jeopardy. Rey is keeping tabs on the guy, so it won’t be hard for him to figure out what’s going on!