The Young and the Restless Spoilers: Sharon Embraces Dark Side After Adam Shocker – Refuses to Fight Shadam Passion Any Longer

BY Heather Hughes on August 28, 2019 | Comments: one comment
Related : Soap Opera, Spoiler, Television, The Young and the Restless 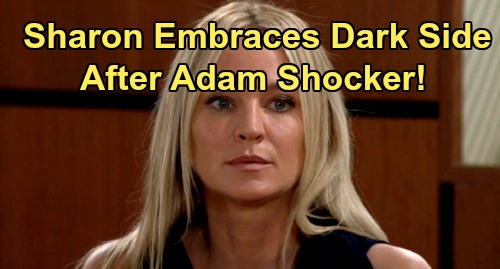 The Young and the Restless (Y&R) spoilers reveal that some interesting things are happening in the Adam Newman (Mark Grossman) love saga. Adam’s got business to take care of since he’s plotting to destroy his family, but there’s more to life than just war and destruction. It’s clear that Adam could use someone special his life, and Y&R’s dangling a couple options right in front of us.

Grossman arguably has solid chemistry with both Sharon Case (Sharon Newman) and Melissa Claire Egan (Chelsea Newman) – although how much and what works best depends on your point of view. Some fans are loving the “Shadam” steaminess, but others feel like “Chadam” is where it’s at.

Story-wise, Y&R’s made it so either option is believable. Adam’s deep connection with Sharon has resurfaced and continues to be intense. However, his more recent love for Chelsea is fresh in viewers’ minds. It’s nice to see Chelsea lightening up lately and seeing the good in Adam again. It never made sense for Chelsea to be so wary of Adam when she was so in love before the explosion.

However, Nick Newman’s (Joshua Morrow) involvement makes things interesting. Despite easing up on Adam, Chelsea certainly doesn’t seem ready to reunite or even hop in the sack with him anytime soon. The Young and the Restless apparently wants to pursue the “Chick” angle for a while. Chelsea and Nick make love on the Y&R episode of Wednesday, August 28, so this should kick off a new chapter for them – although there’s no predicting how long it’ll last.

Even so, there are some great reasons for Sharon to be next in line as Adam’s main squeeze. Case seems very on board with a “Shadam” reunion based on her Twitter comments. We’ve heard rumblings that Grossman enjoys working with Case, too. The Young and the Restless might as well please these costars for now, especially since they’ve been building up “Shadam” from the start.

Sharon was the one who got through to amnesiac Adam and convinced him to make a Genoa City comeback. She’s had moments of regret along the way, but part of her will always love Adam. Since Adam stepped aside in the Christian Newman (Alex Wilson) custody battle, that’ll surely score him a few points with Sharon. Since Nick refuses to lift that restraining order, that’ll give Adam sympathy points, too.

The only big hurdle left may be Adam’s fight to destroy his family. It’s showing off Adam’s dark side, which Sharon doesn’t like. However, Victor Newman (Eric Braeden) may prove he can be just as dark – and his other children may support him in it. The Young and the Restless spoilers say this war is set to take a stunning turn during the week of September 2-6.

If Adam gets hurt or at least faces a blow Sharon feels is too low, she may realize there’s a little darkness in everyone. Sharon was rattled when Adam suggested they both had that darkness within them. She doesn’t want to believe she’s like Adam, but perhaps she’s more like him than she’s willing to admit. Sharon’s rage over whatever happens to Adam may prove that to her. She just might join his fight!

Regardless, Adam needs some good loving – and he’s right about it potentially settling him down. It’s not Sharon’s job to fix Adam, but maybe having someone in his corner is exactly what he needs right now. The Young and the Restless spoilers say Sharon may not be able to resist her feelings for much longer.

Will Sharon reconsider that marriage proposal? Would you like to see Sharon embrace a more complex version of herself by being with Adam? We’ll give you updates as other Y&R news comes in. Stay tuned to the CBS soap and don’t forget to check CDL often for the latest Young and the Restless spoilers, updates and news.