BY hellodrdavis on August 28, 2019 | Comments: one comment
Related : Soap Opera, Spoiler, Television, The Young and the Restless 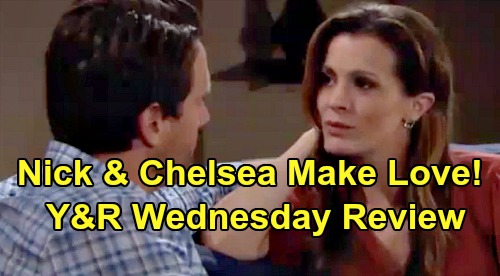 The Young and the Restless spoilers review for Wednesday, August 28, tease that a gum-chewing Billy Abbott (Jason Thompson) will break into Adam Newman’s (Mark Grossman) penthouse, where he’ll rummage around. He’ll finally locate Adam’s mother’s embroidered handkerchief – the same handkerchief that he saw Chelsea Lawson (Melissa Claire Egan) give Adam in the park. He’ll take the handkerchief with him and bolt from the penthouse.

Meanwhile, Chloe Mitchell (Elizabeth Hendrickson) will become alarmed about what’s been going on with Billy when she gets updates from Kevin Fisher (Greg Rikaart) about what Billy’s been going through. Kevin will explain that Billy seems be obsessed with his memories of Delia Abbott (Sophie Pollono), and that he believes he’s been getting messages from beyond the grave from Delia. That will really worry Chloe, who will feel the need to go talk to Billy immediately.

Chloe will then find non-gum-chewing Billy at Victoria Newman’s (Amelia Heinle) house. He’ll figure out pretty quickly that Kevin told her about his recent problems, and she’ll want him to open up about what’s been going on. She’ll express personal understanding for what he’s been going through, and he’ll eventually reveal that he’s talked to both a therapist and to Victoria, but that he’s still struggling. He’ll recount his nightmares, and how he’s been waking up in random locations with no recollection of how he got there.

Chloe will try to tell him that Delia is at peace, and she’ll hate that he’s torturing himself over Adam. She’ll urge him to try therapy again, and she’ll explain that she’s ended that vicious cycle for herself and she’ll be damned if she’s going to let Adam take her life away from her. She’ll hope she got through to Billy, and he’ll say she’s given him a lot to think about, but before she leaves, he’ll say that he still wishes she aimed a little higher when she pulled the trigger on Adam.

Billy will then fall asleep on the couch and have a terrible nightmare about Delia running through the house trying to get away from Adam. He’ll hear her voice calling for him to help her, and that she needs him, and she’ll tell him “you have to stop Adam, or I’ll never be free.” With that, Billy will awaken, pop some gum in his mouth, and take out the handkerchief.

Later, gum-chewing Billy will show up at the Chancellor mansion to see Chloe. He’ll darkly tell her that he’s going to take her advice and that he knows how to handle his issues with Adam now. Chloe will wonder exactly what he means, but he’ll simply tell her goodnight and leave.

Shortly thereafter, Adam will receive a text from someone saying “I have something that belongs to you. Meet me at the curve in the road on route 7. You know where I mean.” Adam will be clearly distraught at the text, and will text back asking “who is this,” but he won’t get an answer.

Next, on the new episode of Y&R on Wednesday, August 28, Nick Newman (Joshua Morrow) will finally bring Christian Newman (Alex Wilson) home from Victoria’s house. Both he and Christian will be stoked that they’re back together again, and soon Chelsea and Connor Newman (Judah Mackey) will arrive with pizza. As the boys go to wash up for dinner, Nick and Chelsea will embrace and each will be happy with their current situation. The boys will get along well

playing video games, and they’ll want to stay up late and continue their evening, but Chelsea and Nick will finally get them to bed.

Later, Nick and Chelsea will share some wine and talk about their days. Nick will relay his earlier confrontation with Adam, when Adam asked Nick to lift the restraining order so he could see Christian. But Nick will say that he’s not going to let Adam confuse Christian right now, and Chelsea will agree. She’ll share that Connor’s visit with Adam went well, and that Adam was nice and respectful.

Nick and Chelsea will get closer as the evening progresses, and they’ll muse that they loved sharing this night together. Nick will hope that there are many more evenings like this, and Chelsea will say that she knows what she’d like to have happen next as they kiss. They’ll ultimately end up in the bedroom and will make love.

While things may seem great for Nick and Chelsea right now, it likely won’t stay so idyllic for long. The threat of Adam in their lives is real, and we can’t forget that he’s the father of both of their boys. As Christian and Connor get closer, Christian will surely notice that Connor is spending a lot of time with Adam, and he may remember Adam claiming to be his father. At any rate, keeping Adam out of Christian’s life going forward will likely be a challenge.