BY Heather Hughes on August 28, 2019 | Comments: one comment
Related : Soap Opera, Spoiler, Television, The Young and the Restless 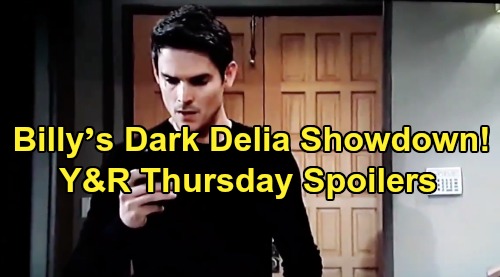 The Young and the Restless (Y&R) spoilers for Thursday, August 29, tease that Lola Abbott (Sasha Calle) will catch up with her big bro. She’ll enjoy a chat with Rey Rosales (Jordi Vilasuso), which should involve a recap of her wonderful honeymoon and how life’s treating her as a newlywed. Lola may admit things are pretty perfect now that she’s Mrs. Kyle Abbott (Michael Mealor). Sadly, they won’t stay that way for long!

Kyle gave Lola a very edited version of his wild party days. Lola freaked out over even that, so Kyle’s not keen on telling her the Zoe Hardisty (Anna Grace Barlow) shocker. However, the secret will stay under wraps for now. Lola will remain happy in love, and she’ll hope to renew Rey’s happiness, too. Y&R spoilers say Lola will try to push Rey back toward Sharon Newman (Sharon Case).

In Thursday’s episode, Lola will give Rey some advice and hope he can find a way to forgive Sharon. Rey might suggest that he already has. This is more about trust than it is about forgiveness. No matter how hard she tries, Sharon is always going to drift back in Adam Newman’s (Mark Grossman) direction. There’s an inescapable bond between them that Rey would have to worry about forever.

Even so, Lola will wish Rey and Sharon could get back on track. She’s over the moon in her own relationship, so she’ll just want the same for Rey. Meanwhile, Kevin Fisher (Greg Rikaart) will confide in Victoria Newman (Amelia Heinle). He might open up about his concerns regarding Billy Abbott (Jason Thompson) as well as some of the drama he’s faced with Chloe Mitchell (Elizabeth Hendrickson).

Kevin could warn that it’s best to get a grip on the situation early. He may regret letting Chloe get out of hand at times – like when she managed to sneak back into town to shoot Adam. Of course, Kevin may not go into a ton of detail here, but he’ll make it clear that Billy needs help. His loved ones have to make sure he gets it.

Unfortunately, Billy has already put an extreme plan in motion. On Wednesday, Billy steals the handkerchief belonging to Adam’s mother and sends an anonymous text. He notes that he has something that belongs to Adam and wants to meet at the curve on route 7 – the spot where Delia Abbott (Sophie Pollono) was run over.

The Young and the Restless spoilers suggest Adam will end up there on Thursday, so a serious showdown will begin. Billy’s alternate personality – that gum chewer we keep seeing – will take center stage. Just before this faceoff spirals out of control, a surprise guest will arrive. That may be Chloe since an earlier chat with Billy will leave her on edge.

Will Chloe come to Adam’s rescue? It’d be quite a twist since Chloe has tried to murder Adam on more than one occasion! The Young and the Restless spoilers say some Adam chaos is about to explode. We’ll give you updates as other Y&R news emerges. Stick with the CBS soap and don’t forget to check CDL often for the latest Young and the Restless spoilers, updates and news.