The Young and the Restless Spoilers: Sharon & Rey Get A Do-Over – Couple Still Drawn Together, Will They Reunite? 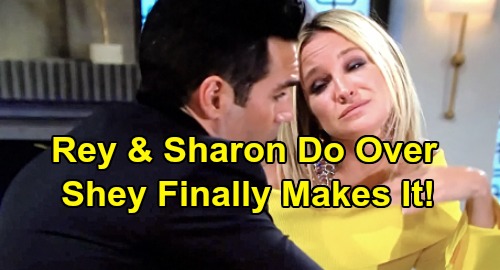 The Young and the Restless spoilers tease that Sharon Newman (Sharon Case) will enjoy some time away from Genoa City. As Y&R viewers know, she trekked off to Sedona, Arizona, where she wound up at the same resort and spa as Jack Abbott (Peter Bergman). It looks like she’ll enjoy her time with her ex-husband and good friend, and she’ll get the perspective on her life that she’s been looking for.

Sharon’s been through a lot in the past several weeks with both Rey Rosales (Jordi Vilasuso) and Adam Newman (Mark Grossman). As Y&R viewers will remember, Sharon allowed Adam to get in her head and wreak havoc on her relationship with Rey, which led Rey to walk out on their relationship. Soon thereafter, Sharon was in bed with Adam, and that really led her into a dark place.

Of course, Adam seemed to be constantly around, hounding Sharon about marrying him and taunting her about her failed relationship with Rey. And then the mass drugging at The Grand Phoenix opening happened, which led a very drugged Sharon to kiss Rey and lament to him about their failed relationship. Despite being drugged and not thinking rationally, the incident thoroughly embarrassed her, and she was glad to head out of town to Sedona.

At this point, many Y&R fans are wondering whether Sharon and Rey have any chance of working things out going forward. Since Sharon slept with Adam, a “Shey” reunion hasn’t seemed too promising, and given what Sharon recently told Jack at the Sedona spa, she just needs a reset where relationships are concerned. But could Rey be part of that reset? We think there’s a good chance that Rey and Sharon could find their way back to each other.

Of course, if Rey and Sharon do ever get back together, what they really need is a complete do-over. And given that Adam’s little stunt in messing with Victor Newman’s (Eric Braeden) medications will soon come to light, it stands to reason that Sharon will be thoroughly disgusted with Adam, and she’ll probably just write him off. And that’s exactly what she needs to do if she and Rey have any shot of working in the future.

According to Y&R spoilers, Rey and Sharon will continue to find themselves drawn together this autumn, but we hope they’ll do things right this time around and take things slowly. Last time around, they seemed to jump right into living together, which didn’t work, so perhaps this time they’ll take things slowly and date for a while before they launch into a serious relationship. They owe it to themselves to do things right this time!

Do you think that we’ll see a “Shey” reunion later this year? Stay tuned to the CBS soap and don’t forget to check CDL often for the latest Young and the Restless spoilers, updates, and news.