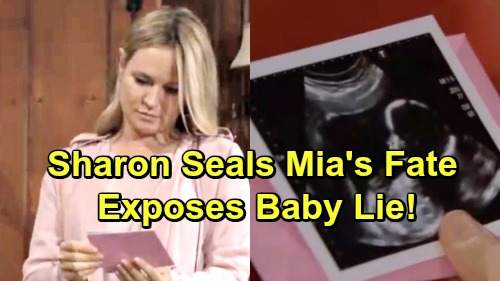 The Young and the Restless (Y&R) spoilers tease that Rey Rosales (Jordi Vilasuso) will remain uneasy about the secret he’s keeping. He alluded to some complications when Mariah Copeland (Camryn Grimes) grilled him on Wednesday, April 3, and Mia Rosales’ (Noemi Gonzalez) pregnancy certainly fits the bill. Rey hasn’t found the right moment to tell Sharon Newman (Sharon Case) yet, but he’s about to miss his shot.

Mariah’s worried that something will hold Rey back from happiness with Sharon, so that’s a hint about what’s to come. On Thursday, The Young and the Restless spoilers say the baby bomb will drop on Sharon when she finds Mia’s ultrasound photo on Thursday Y&R episode, April 4. She’s sure to feel blindsided and concerned about Rey drifting back in Mia’s direction.

However, there’s no way this is a permanent deal-breaker. Rey’s secret-keeping is the only issue here. He never planned on Mia getting pregnant, so Sharon can’t fault him for that. Rey and Sharon can’t keep their hands off each other, so a fight or mini-breakup over this would just be for drama’s sake. Y&R is clearly moving forward with “Shey.”

Sharon has a forgiving heart and tends to put up with a lot. The men in her life are always problematic in one way or another, but Sharon’s a big believer in many chances. Rey isn’t trying to hurt her by hiding the baby situation. He just doesn’t want to put a damper on their new romance with Mia mayhem.

Besides, it seems Sharon won’t even believe Mia’s actually carrying Rey’s child. Rey can’t be sure of that himself! That’s another reason he hasn’t told Sharon anything yet. Mia’s baby could belong to Arturo Rosales (Jason Canela), so The Young and the Restless spoilers say the paternity drama could heat up soon enough.

During new Y&R episodes, the week of April 8-12, Sharon will insist that Mia’s bluffing. Is this the beginning of the end for Mia? Since Mia has been Sharon’s rival since she hit town, it’d be fitting for Sharon to take her down.

Perhaps she could put Rey on the path to the truth. If Y&R sticks with the original story, the truth would be that Mia made up the pregnancy entirely. After all, we don’t have proof that this ultrasound photo is really Mia’s.

A lie like that could earn Mia a lengthy prison sentence. Rey would certainly have Mia locked up for Lola Rosales (Sasha Calle) attack without a baby to stop him. Will Sharon push Rey to get answers and seal Mia’s fate? Could Sharon somehow expose the pregnancy lie herself? Even if the kid exists and turns out to be Arturo’s, Sharon may be the one to push Mia out of the picture for good.