BY Sean O'Brien on May 9, 2019 | Comments: Leave Comments
Related : Soap Opera, Spoiler, Television, The Young and the Restless 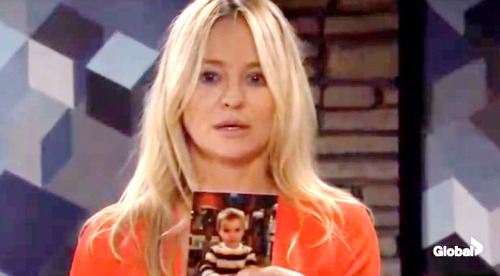 It’s fair to critique the inclusion of Case’s character in the latest Adam Newman (as now played by Mark Grossman) comeback arc. Sharon was involved with Adam when he looked like Michael Muhney.

As longtime viewers recall, there was an epic storyline where Adam stole Faith Newman (as now played by Alyvia Alyn Lind) at birth, with Sharon coming to believe that Shick’s child died. He passed the baby off as Ashley Abbott’s (Eileen Davidson) in a misguided attempt to help her. She was also pregnant at the time.

Adam eloped with Sharon and also confessed to what he’d done. But she suffered memory loss and didn’t recall what was said.

The above mind wipe hook is being used again, as Spider, the name Adam is going by, doesn’t recall anything after the cabin blast that occurred in September 2016. Victor is playing off the connection Sharon once had with his son.

Initial credit to Y&R, with optimism projected, for starting this particular revival storyline. It’s nod to the past and a fresh take in Las Vegas, Nevada, should work.

Of course, there are soapy elements. As Nick Newman (Joshua Morrow) told Sharon, Adam can’t remember who he is, but possesses prolific gambling skills?Well, yes.

It was smart of Sharon to tell Nick that Victor asked for her help. With that the Christian Newman (Jude and Ozzy McGuigen) paternity issue also comes back to life.

Sage Newman (Kelly Sullivan) revealed, via a letter in her will, that she knew Adam (as then played by Justin Hartley) was Christian’s biological father. Sage thanked Adam for previously changing the paternity test results, so Nick would appear to be the boy’s father.

Adam’s seeming death by cabin blast at Chloe Mitchell’s (Elizabeth Hendrickson) hands three calendar years ago now serves as a pause to the Christian issue that Y&R has mined multiple times. If Sharon is able to help Adam unlock his memory, as Victor hopes, then surely, at some point, he’ll want to reclaim his second-born son.

Y&R fans know that Melissa Claire Egan (Chelsea Newman) has rejoined the cast. So she and Connor Newman (as most recently played by Gunner and Ryder Gadbois) will be returning to Genoa City shortly, implying an eventual Chadam family reunion.

Adam will, at some point, recall everyone, and both of his sons. With that in mind (wink), Y&R is establishing a dynamic resurrection storyline that will play out this spring and summer.