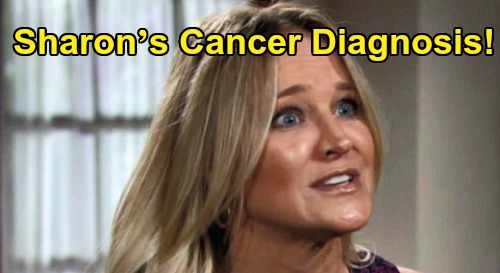 The Young and the Restless (Y&R) spoilers tease that Sharon Newman (Sharon Case) could finally have a gripping story headed her way. Y&R fans know Sharon has been a supporting player lately – and that’s a shame considering what a talented and established vet Case is. Sharon deserves to be doing more than flashing heart eyes at Rey Rosales (Jordi Vilasuso) and giving therapy to a brat who doesn’t want it.

There were recently concerns about Connor Newman (Judah Mackey) taking a dark turn after he glared on the stairs and chanted about making Sharon go away. However, that angle doesn’t seem to be leading to anything now. Fortunately, it looks like Y&R has another major storyline in mind for Sharon – and it’s one that Case would undoubtedly knock out of the park.

Although this hasn’t been confirmed, The Young and the Restless buzz points to a potential cancer story for Sharon – and it makes a lot of sense based on the clues. For starters, preview info for 2020 reveals that a shocking discovery will shake up Sharon’s life. It’ll put her relationship with Rey at risk and bring a family member back to Genoa City.

We know that Faith will leave after the Christmas festivities and return later for a storyline involving Sharon. Faith would certainly want to come home if her mom’s facing a cancer battle. Cancer also fits for a shocking discovery that puts Sharon’s relationship at risk. Rey would surely worry that he’s going to lose her.

Mariah Copeland (Camryn Grimes) needs something to do since she mainly spends her days delivering warnings to and about Summer Newman (Hunter King). Sharon’s story would provide some good material for Mariah as well as Tessa Porter (Cait Fairbanks). It’s hard to imagine Noah Newman (Robert Adamson) staying out of the picture at a time like this, so he could potentially get back in the mix, too.

Of course, Sharon’s exes would be affected if she reveals her diagnosis. Nick Newman (Joshua Morrow) would want to know as the father of Sharon’s children and a close friend. As for Adam Newman (Mark Grossman), he might be hurt if he’s left out of the loop. There’d be a goldmine of drama to work with.

Again, there’s no confirmation just yet, but there’s strong buzz and the cancer puzzle pieces add up. The show could definitely use some bigger storylines that give their actors a chance to shine. If Case gets a cancer story, you can bet she’ll do amazing things with it.