The Young and the Restless Spoilers: Shocking Week of May 27 Promo – Adam and Sharon’s Hot Hookup, Passion Erupts for Old Flames

BY Heather Hughes on May 24, 2019 | Comments: one comment
Related : Soap Opera, Spoiler, Television, The Young and the Restless 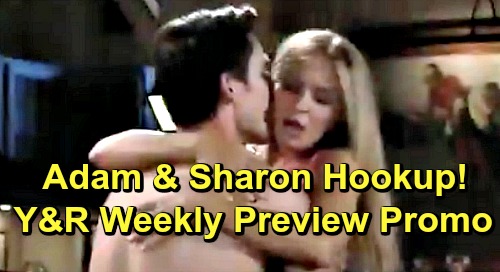 The Young and the Restless (Y&R) spoilers for the week of May 27-31 tease that Adam Newman (Mark Grossman) will prove he’s big trouble! Several Genoa City residents will be left reeling as Adam’s agenda heats up. Nick Newman (Joshua Morrow) will inform Adam that he’s got a fight on his hands. He won’t just stand by and watch Adam take Christian Newman (Jude and Ozzy McGuigen) away.

Y&R fans can expect Nick to talk a good game, but he’ll be terrified deep down. He’ll know there’s a real possibility that he could lose Christian, especially if Victor Newman (Eric Braeden) takes Adam’s side. The Young and the Restless spoilers say Adam will indeed seek Victor’s support. He’ll be willing to be the man Victor wants him to be – as long as Victor helps him get custody of Christian.

Of course, Adam can claim anything he wants and back out later. That could easily be his intention, but Victor may choose to put his faith in Adam. Meanwhile, Nick will fill Nikki Newman (Melody Thomas Scott) in on the war Adam has declared. She’ll wonder what that means, so Nick will admit it might get ugly.

Billy Abbott (Jason Thompson) will also get the scoop from Victoria Newman (Amelia Heinle). He’ll hear about her brother’s mission and wonder what happens if Adam doesn’t get what he wants. Adam doesn’t have a lot of people he can rely on, but he’ll at least know one woman he can trust. The Young and the Restless spoilers say Adam will pay Sharon Newman (Sharon Case) a visit and seek her help.

Y&R’s weekly promo also shows Adam planting a passionate kiss on Sharon. She’ll kiss back and the clothes will start coming off. Adam will seem poised to make love to Sharon on the couch of the tack house. However, it’s possible it’ll be in someone’s head. Will Sharon wake up all hot and bothered after a sex dream about Adam? That’s one option to consider.

Then again, it’s possible Sharon might actually hook up with her former flame. Anything can happen when a bad boy lands in GC! Adam will likely exploit his past connection with Sharon to accomplish all his goals, so Rey Rosales (Jordi Vilasuso) had better watch out.

It sounds like some fantastic episode are coming up. We’ll give you updates as other Y&R news emerges. Stay tuned to the CBS soap and don’t forget to check CDL often for the latest Young and the Restless spoilers, updates, and news.