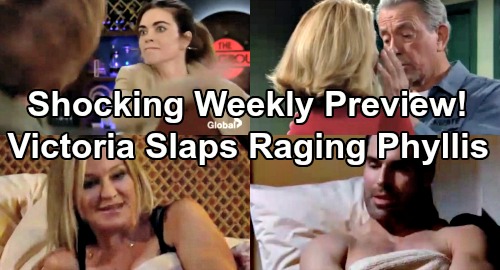 The Young and the Restless (Y&R) spoilers for the week of January 7-11 tease that some Genoa City shockers are on the way. For starters, Sharon Newman (Sharon Case) and Rey Rosales (Jordi Vilasuso) will find themselves in a sticky situation. A preview video for next week shows Sharon in a tank top and under a comforter in bed. She looks to a shirtless Rey across the room for some help.

Sharon asks Rey if he has any suggestions on how to pass the time. For some reason, these two are stuck in a bedroom together, so it should be interesting to see how they end up there and how long this awkwardness lasts. If Mia Rosales (Noemi Gonzalez) finds Rey and Sharon in such a compromising position, it could lead to even more trouble!

Meanwhile, Kyle Abbott (Michael Mealor) will profess his love to Lola Rosales (Sasha Calle) – although many Y&R fans are probably wondering why! All Kyle’s done since they became an item is walk on eggshells and try to obey Lola’s strict rules. She’s really made Kyle work for this romance.

Lola even broke up with Kyle because of the nice Christmas gift he gave her and kissed Fenmore “Fen” Baldwin (Zach Tinker) on New Year’s Eve to make him jealous. However, smitten Kyle groveled until Lola agreed to reunite and now they’re going strong again. The Young and the Restless spoilers reveal that Lola will at least say “I love you” back, so it’s good that Kyle won’t be left hanging.

At the GCPD, Nikki Newman (Melody Thomas Scott) will visit her husband. Victor Newman (Eric Braeden) has been charged with the murder of J.T. Hellstrom (Thad Luckinbill), but he’s obviously not responsible. Nikki will want to confess the truth to Victor in the week ahead. She’ll insist that she knows who killed J.T., but Victor will stop Nikki before she says anything else.

Victor will shush Nikki and insist that she should never repeat those words again. He won’t want her spilling her secret to anyone, especially at the police station. It sounds like Victor already knows Nikki did the deed, which should come as no surprise to Y&R viewers.

Victor’s got eyes and ears everywhere, so he may admit he’s well aware of what happened that night. Perhaps Victor even had the body moved to protect the cover-up crew. Over with Phyllis Summers (Gina Tognoni), she’ll lash out at Victoria Newman (Amelia Heinle) as they spar over Victor. Phyllis will snap that Victor is as vile as J.T. ever was and deserves exactly what he gets.

That’ll earn Phyllis a slap from Victoria, but she’s not entirely wrong. Victor has a list of crimes a mile long and Phyllis has certainly been on the receiving end of some of them. Nobody can blame her for holding a grudge!