The Young and the Restless Spoilers: Summer Devastated by Ultimate Newman Family Rejection – Heartbroken and Furious 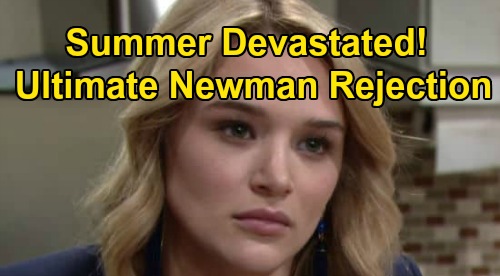 The Young and the Restless spoilers tease that Genoa City is in for a big surprise when the news about Victor Newman (Eric Braeden) being alive comes to light. As Y&R viewers know, Victor and Nikki Newman (Melody Thomas Scott) staged a scene during which Victor pretended to die, all in order to make Adam Newman (Mark Grossman) think that he had killed Victor by tampering with his medication.

As it turns out Victor’s other children were in on the ruse, as was Nate Hastings (Sean Dominic), who helped stage the scene from a medical perspective and make it seem like Victor had died. It was quite elaborate, with Victor collapsing on the floor and his body being hauled away by medics. It also required some skilled acting on everyone’s part, in order to make it all seem real to Adam.

But there was one other person who, like Adam, wasn’t in on the ruse, and that’s Summer Newman (Hunter King). Y&R viewers found out after the fact that Summer was not in on the scheme to fool Adam into thinking that Victor had died, and that means that Summer is currently under the painful belief that her grandfather is gone.

And as Y&R viewers know, Summer has really been suffering. She’s turned to Kyle Abbott (Michael Mealor) and Theo Vanderway (Tyler Johnson) for support, and the whole thing has caused a huge rift between herself and her mother, Phyllis Summers (Michelle Stafford). Summer has pushed Phyllis away and rejected her attempts to console her, since Phyllis couldn’t stand Victor.

Well, at some point soon, the ruse of Victor’s death is going to revealed, and we think it’s safe to say that Summer isn’t going to be happy. Of course, she’ll probably be initially overjoyed to find out that her grandfather is alive, but she’s also going to be seriously peeved at her family for not including her in the plan to fake Victor’s death. She’ll likely feel like her family didn’t trust her, and she may lash out at them.

Of course, it will probably be especially painful for Summer to learn that Abby Newman (Melissa Ordway) knew the truth and deliberately kept it from her, despite spending so much time with her in the aftermath of Victor’s “death” but saying nothing. Abby and Summer don’t get along anyway, so this might serve to drive a further wedge between them.

Y&R spoilers say that Phyllis will soon stand up for Summer, so we may see Phyllis herself last out at the Newmans for treating Summer like a little kid who couldn’t be trusted. Of course, the reason that the Newmans didn’t tell Summer about the ruse in the first place was because they didn’t want Phyllis to find out. That news will likely upset both Summer and Phyllis.

At any rate, there’s going to need to be some serious and heartfelt apologies by members of the Newman family to Summer. She may not just get over her anger and frustration over being the only family member besides Adam who was kept in the dark about Victor being alive. It will be interesting to see how the family deals with Summer’s rage when she finds out the truth, and whether they’re able to placate her.

Do you think that her family’s deception will drive Summer away from the family? Stay tuned to the CBS soap and don’t forget to check CDL often for the latest Young and the Restless spoilers, updates, and news.