The Young and the Restless Spoilers: Summer Gets a New Man – Handsome Theo Hits Town Looking for Love

BY Heather Hughes on May 3, 2019 | Comments: one comment
Related : Soap Opera, Spoiler, Television, The Young and the Restless 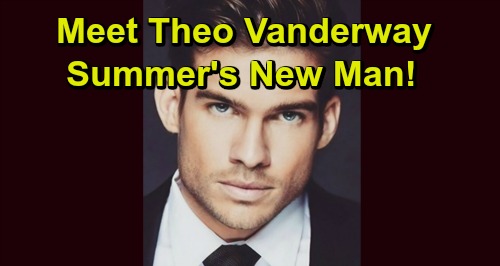 The Young and the Restless (Y&R) spoilers tease that a new hunk is headed to Genoa City. According to Soap Opera Digest, Tyler Johnson has joined the cast as Theo Vanderway. He’s a manager of social media influencers and has a connection to Kyle Abbott (Michael Mealor). Theo was a colleague Kyle knew when he was living in New York City, so there are all sorts of fun possibilities cooking.

For starters, let’s acknowledge that the Y&R casting department picked a winner here – at least based on his overall look. This guy is extremely handsome and seems like he could have some real swagger. Could Theo catch Summer Abbott’s (Hunter King) eye? It’d be interesting if she decided the best way to get over one man was to get under another one!

Theo would be perfect for that, especially due to the Kyle connection we mentioned. Kyle’s all about Lola Rosales (Sasha Calle) right now, but what happens if Summer moves on with someone he used to work with? That could spark serious jealousy. If Kyle doesn’t trust Theo and believes he’ll hurt Summer, that’d be even better. Kyle could become very territorial as Summer flaunts her new romance.

The Young and the Restless spoilers say Summer will keep scheming throughout May sweeps, but she might fail to tear Lola and Kyle apart. Summer could easily get tired of the fight and decide to keep it casual for a while. Perhaps Summer could have a fling with Theo, who might become quite smitten and want more.

Will Summer use Theo to potentially pull Kyle back to her? Could she actually fall for Theo instead? Again, we’re just basing this on looks since Johnson hasn’t aired yet, but he seems like Theo and Summer could have some hot chemistry. He’s definitely Summer’s type, so why not? Y&R should give it a try and see what happens!

Of course, Theo could mix it up with another lucky lady if things don’t work out with Summer. He’ll undoubtedly be a great addition who can add some spice to the Genoa City love scene. The Young and the Restless spoilers say Theo’s first airdate will be June 3, so don’t miss his Y&R debut.

What do you think about Theo and his romantic options? Do you think he’ll be a new love interest for Summer? We’ll give you updates as other Y&R news emerges. Stick with the CBS soap and don’t forget to check CDL often for the latest Young and the Restless spoilers, updates, and news.