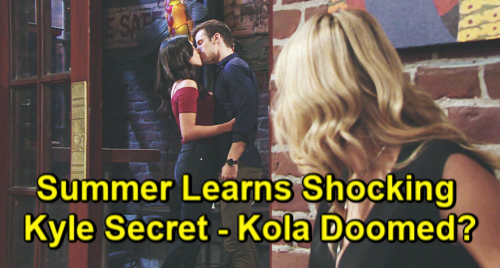 The Young and the Restless (Y&R) spoilers tease that Phyllis Summers (Michelle Stafford) could find herself in a tricky situation, which could put Summer Newman (Hunter King) in a tricky situation as a result. During the week of August 5-9, Theo Vanderway (Tyler Johnson) will face an interrogation. Phyllis will learn something that gives her a reason to grill Theo, so it looks like trouble’s brewing.

Y&R fans know Kyle Abbott’s (Michael Mealor) past has been a big part of the story lately. Kyle partied hard in New York with Theo, so his now former friend has serious dirt on him. The Young and the Restless has clearly invented some shocking secret to threaten Kyle and Lola Rosales’ (Sasha Calle) relationship.

Kyle’s quite concerned about this NYC secret getting out, so he’s not handling the situation very well. Roughing up Theo and tossing around threats aren’t the best strategies. Theo could potentially destroy Kyle’s world by blabbing to Lola, so angering him really isn’t the way to go.

Will Phyllis Summers Learn A Damaging Secret About Kyle Abbott?

However, Theo is getting on Kyle’s last nerve and he just can’t help himself. Kyle fought so hard to be with Lola, so the last thing he wants is for Theo to blow this for him. Of course, it may not be Theo himself who actually does that. Since Phyllis will put Theo on the hot seat, she may overhear something about New York and wonder what exactly went down.

Phyllis is one of the sneakiest people in town. If anyone can find out what Kyle’s hiding, it’s her. Theo’s involvement should worry Phyllis since Summer’s growing closer to him. Phyllis won’t want her daughter to get hurt, so it’s reasonable for her to be curious and start poking around.

What happens if Phyllis uncovers the stunning truth? She would likely fill Summer in, which could bring a difficult choice. This secret sounds like it could be a deal-breaker if Lola knew. Summer might have to decide if she’s going to spill the beans to Lola or keep her mouth shut.

That would be a tough decision for Summer, who clearly still has feelings for Kyle. It would get Lola out of the way, but Kyle would also hate Summer for screwing everything up. Coming clean probably wouldn’t benefit Summer – but then again, she may decide this isn’t about her.

Summer might think about what she would want if she were in Lola’s shoes. She would probably want someone to be honest with her about the man she intended to marry. Starting off with a huge secret between them isn’t a good idea. Summer knows the pain of a failed marriage to Kyle, so she might want to protect Lola’s heart from similar pain. Y&R’s definitely been softening Summer lately.

Whatever the case, The Young and the Restless spoilers say Theo may slip up and put “Kola’s” future in jeopardy. Even if he’s willing to let Kyle have his big day in peace, will Phyllis? What about Summer? As this secret potentially spreads, the walls could close in on Kyle. Perhaps the best plan would be for Summer to give Kyle a choice: tell Lola the truth or watch her do it for him.

It should be interesting to see how it all plays out – will Kola survive the truth about Kyle’s past? We’ll give you updates as other Y&R news comes in. Stay tuned to the CBS soap and don’t forget to check CDL often for the latest Young and the Restless spoilers, updates and news.