The Young and the Restless Spoilers: Tessa’s Past Comes Back to Haunt Her – Mariah Learns Shocking Secret 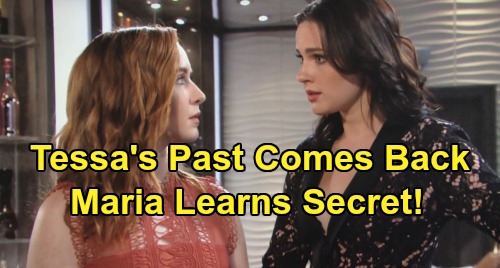 The Young and the Restless (Y&R) spoilers tease that a surprising offer is headed Tessa Porter’s (Cait Fairbanks) way, but it won’t be the exciting news Mariah Copeland (Camryn Grimes) thinks it is. Tessa will get a text from a popular recording artist named Tanner Watts (Chase Coleman), so Mariah will assume he wants to collaborate. Since Tanner’s a big deal in the music world, Mariah will feel like this is cause for celebration.

However, Tessa will be pretty on edge after she receives this message. Mariah will immediately realize something’s up, but she’ll guess Tessa’s probably just stressing out or afraid of blowing her shot. Unfortunately, there’s much more to the story when it comes to Tanner. Once Tessa meets up with him as requested, it’ll become apparent that Tanner is a face from Tessa’s past.

The Young and the Restless spoilers say Tessa won’t view this as some amazing opportunity. She’ll be quite suspicious of Tanner’s motives, but he’ll explain that he heard Tessa’s music and would like her to be his opening act on tour. Soon after, Tessa will give Mariah updates on Tanner’s offer, which will put Tessa in a familiar position.

Y&R fans know Tessa’s kept plenty of secrets during her run on The Young and the Restless, but she’s tried to put her mistakes in the rearview mirror. Tessa hasn’t done anything wrong in over a year, so it’s safe to say she’s a redeemed character. That doesn’t mean her past can’t come back to haunt her, which is what’s about to happen. It’s how Tessa chooses to handle it that’ll be the key.

Back when Mariah’s stalker started revving up his threats, she initially kept quiet about it. Tessa gently reminded Mariah that they didn’t keep secrets anymore, which led to Mariah spilling the details. There’s a good chance we’ll see something similar now. The Young and the Restless spoilers say Mariah will find out a secret soon after this meeting with Tanner, so Tessa will likely come clean.

There’s no word yet on what went down between Tanner and Tessa, but it doesn’t sound good! Tessa has mentioned how the rotten men in her past always wanted something from her. It certainly sounds like whatever happened with Tanner is something Tessa would rather forget.

Will Tanner blackmail Tessa over some shocker from long ago? Will he threaten Tessa or insist he’s changed instead? Regardless, Tanner is clearly the troublemaker in this scenario. The Young and the Restless is setting it up for Tessa to be the sympathetic character here – particularly if she confesses to Mariah pretty quickly, and she probably will.

We should also note that Fairbanks is NOT leaving the show. Some sites out there will undoubtedly try to claim that using this info, but Fairbanks herself shut down the idea on December 17. She posted a joke on Instagram using the caption, “that’s a wrap for Tessa……in 2019” and an emoji to indicate she was teasing everyone.

Of course, Fairbanks just meant she filmed her last scenes of the year along with her fellow cast members, but some viewers inevitably got confused. When one asked if this meant Fairbanks was off Y&R, she said, “nope!” There was also a gotcha pic with a wink to confirm the joke, but “Teriah” fans still got extra reassurance that she’s not exiting. Fairbanks will be back to film more scenes in 2020.

Even if Tessa did go on tour for a bit (and she may not since Tanner’s shady), it wouldn’t be any different than the last few weeks she’s been offscreen in Genoa City. Tessa is a recurring character like many others around town. She pops up for new scenes, disappears for a while and then pops up for more.

Even so, there are two reasons this tour may not pan out. One is that Tanner’s offer obviously won’t be something Tessa’s happy about. It seems like a situation where Tessa may have to choose self-respect over her career – much like she did the time she clashed with Ana Hamilton (Loren Lott) and told her to just burn the contract. They later resolved things, but it established that Tessa’s willing to stand up for herself.

There’s also the matter of Sharon Newman’s (Sharon Case) upcoming storyline. Insiders point to a serious illness for Sharon starting in early 2020. There’s buzz about a cancer diagnosis, so that’s something Tessa would need to support Mariah through. Unless Y&R writers decide to write Tessa wildly out of character, she’ll want to put Mariah first and be there for her during her mom’s crisis.