The Young and the Restless Spoilers: Theo’s Surprise Family Visit From Eric Vanderway – Lied To Summer About Father’s Death?

BY hellodrdavis on October 8, 2019 | Comments: one comment
Related : Comings & Goings, Soap Opera, Spoiler, Television, The Young and the Restless 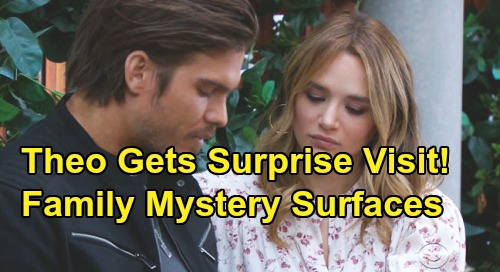 The Young and the Restless spoilers has some news to pass on about a new addition to the Y&R cast. Soaps.com is reporting that Jon Briddell will be joining the cast in the role of “Eric Vanderway.” His appearance will be on Thursday, November 7, and he’ll presumably be playing an older family member of Theo Vanderway (Tyler Johnson), who has been causing trouble on the Genoa City scene.

Theo is currently in a casual dating relationship with Summer Newman (Hunter King) and has been doing his best to support her through the tough time she’s been having with her family. But it’s clear that he’s lacking in the emotional support department, although he seems to do the best he can. Theo recently shared with Summer some details about his own father’s death when she was grieving the loss of Victor Newman (Eric Braeden).

Given that the character of Eric Vanderway has been cast by an actor who’s clearly the age of someone who could be his father, one wonders whether Theo was being totally honest with Summer about his father’s death.

Will Eric Vanderway Turn Out To Be Theo Vanderway’s Father?

Could Eric end up being Theo’s father who comes to Genoa City looking for his son? Or perhaps an older brother? Either possibility is an option, but chances are, it will be Theo’s father, given that he’s recently come up in conversation.

If that’s the case, then did Theo lie to Summer about his father’s death? Theo’s a pretty insecure guy and seems like the type who might make up a story in a situation in which he doesn’t know what to say or how to act.

But then again, he also seems like the kind of person who might have been seriously wounded by a parent’s untimely death. It’s always possible that Eric be appearing in a flashback scene of Theo’s, perhaps as he recounts another memory about his dad to Summer.

Theo Vanderway Will Have Some Big Explaining To Do

But if Eric does turn out to be Theo’s dad who is very much living, then Theo’s going to have some big explaining to do to Summer. Summer is really (and we mean REALLY) sensitive to being lied to at this point, and she wouldn’t like it at all if Theo were to have lied to her about something so important. In fact, it might drive her further back into Kyle Abbott’s (Michael Mealor) direction for emotional support.

It will be interesting to see exactly who Eric ends up being in relation to Theo. By the way, the actor who will be portraying Eric, Jon Briddell, has an impressive resume and has been seen in numerous TV series, including Doom Patrol, Queen America, and American Crime Story. He’s also been recently seen in the movie Nancy Drew And The Hidden Staircase.

Do you think it will turn out that Theo lied about his dad to Summer? Stay tuned to the CBS soap and don’t forget to check CDL often for the latest Young and the Restless spoilers, updates, and news.