BY Heather Hughes on October 8, 2019 | Comments: one comment
Related : Soap Opera, Spoiler, Television, The Young and the Restless 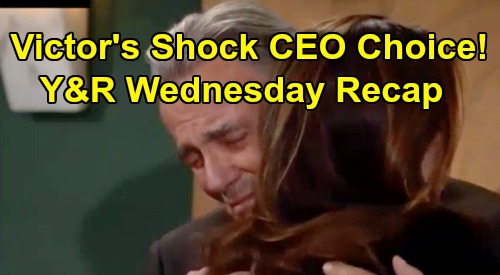 The Young and the Restless (Y&R) spoilers recap for Wednesday, October 9, tease that Kyle Abbott (Michael Mealor) and Lola Abbott (Sasha Calle) will do some house hunting online. They’ll struggle to pick out one they like before they shift gears and discuss Jabot. Kyle will be frustrated over Billy Abbott (Jason Thompson), but Lola will think there may be a way to use Billy’s true colors against him.

If Billy tries to shove Kyle aside, it could bring backlash from Jack Abbott (Peter Bergman) – who put them both in charge. Kyle will allude to giving Billy just enough rope to hang himself. He’ll excite Lola, who’ll have faith that Kyle will come out looking like the better option.

At Society, Victoria Newman (Amelia Heinle) will tell Billy that returning to Jabot would mean taking a step backward. She’ll plan to stand up to Victor Newman (Eric Braeden) instead, and that’s exactly what she’ll do in Victor’s office. Y&R spoilers say Victor will notice the letter opener stuck in his portrait before Victoria appears. She’ll make it clear she’s not there to apologize; she wants to explain her terms.

Victor will listen as Victoria talks about how much she’s learned from Victor. He’s given her so much, but the one thing she really desires is the throne. Victoria will make a strong pitch to be Newman’s permanent CEO. She’ll argue that if Victor denies her this opportunity, he should consider their relationship over. Victoria will vow to start her own company and fight Victor with everything she’s got.

Victor will be proud of Victoria for proving she’s her father’s daughter. He’ll let a stunned Victoria know the chair’s hers before they tearfully embrace. At the coffeehouse, Mariah Copeland (Camryn Grimes) will show up for a meeting at Theo Vanderway’s (Tyler Johnson) request. He’ll announce that he’s quitting Power Communications and explain that it’s just not a good fit.

Mariah will mess with Theo before revealing she already knows he was fired and why. He’ll protest that Devon Hamilton (Bryton James) overreacted, but Mariah will offer some advice. She’ll point out that she used to be like Theo, but that was a lonely life. Mariah will encourage Theo to make some changes as their conversation wraps up.

In Las Vegas, Phyllis Summers (Michelle Stafford) will want to join Adam Newman (Mark Grossman) in whatever he’s planning. Adam will deny that he’s cooking anything up, and he’ll insist he likes living in Vegas. After Phyllis pushes Adam to return to Genoa City, he’ll suggest she should join him out there instead. Phyllis will remind Adam that she has a kid in GC and he does, too. However, Adam will maintain that Connor Newman (Judah Mackey) is better off without him.

Phyllis will also suggest a wager in hopes of prying info out of Adam. She’ll promise to leave if he wins a game of five-card draw, but Adam will have to provide answers if he loses. Once Phyllis achieves a victory, she questions Adam about his latest faceoff with Victor. Phyllis will think this is the perfect time to strike Newman Enterprises since Victor’s guard is down.

The Young and the Restless spoilers say Phyllis will pledge her support, but Adam will be adamant that no revenge is happening. Phyllis won’t be so sure Adam can ditch his vengeful side. After Cane Ashby (Daniel Goddard) arrives, Phyllis will comment that this is interesting. She’ll certainly be having an eventful trip out in Vegas!

Back in Genoa City, Summer will get updates on Theo’s firing from Hamilton-Winters. She’ll point out that if Theo can’t work for a guy like Devon, he can’t work for anybody. Summer will urge Theo to get over himself, but he’ll think she’s one to talk. Theo will sarcastically suggest that maybe he’s just not as evolved as the new-and-improved Summer.

As Lola and Kyle pass through, Lola will let Summer know Kyle intends to take charge at Jabot. Of course, Kyle will want to be cautious about his expectations. He’ll think this may be harder than Lola predicts.

Later, Summer will speak with Kyle at the office. She’ll feel like Kyle needs to carve out personal time for selecting a new home. Summer will talk about how getting caught up with work can bring regrets like the ones she has.