BY Heather Hughes on April 10, 2019 | Comments: one comment
Related : Soap Opera, Spoiler, Television, The Young and the Restless 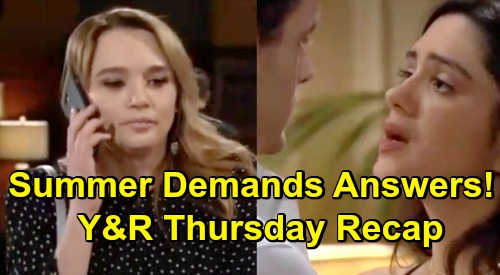 The Young and the Restless (Y&R) spoilers update and recap for Thursday, April 11, tease that Kyle Abbott (Michael Mealor) and Lola Rosales (Sasha Calle) will heat things up. In a hotel suite, Kyle will remove his wedding band and undress for sex along with Lola. However, he’ll ultimately declare that he can’t do this. Kyle will determine that he has to end his sham marriage to Summer Abbott (Hunter King) first.

Nevertheless, Kyle will assure Lola that she’s the one he wants. He’ll be convinced he can just go to Summer and make her understand that he’s still in love with Lola. Meanwhile, Summer will return to town with Phyllis Summers (Gina Tognoni). When she realizes Kyle’s gone MIA and may be with Lola, Summer will do her best to track him down.

Y&R spoilers say Summer will even end up at Rey Rosales’ (Jordi Vilasuso) place looking for them. She won’t realize that Lola and Kyle were two seconds away from sleeping together at the GCAC. After Summer gives up and heads to the Abbott mansion, she’ll be relieved to see that Kyle’s there. However, Summer will still wonder what Kyle’s been up to all night. Will her guilty groom come clean as planned?

At Crimson Lights, Phyllis will notice Lola sitting by herself. She’ll realize her plan may not have worked as well as she hoped, but she’ll still hope to give those “Abbott boys” what they deserve! Over with Jack Abbott (Peter Bergman), he’ll prepare some sneaky moves to fight back against Ashley Abbott (Eileen Davidson). This war is still heating up, so it’s bound to spiral out of control down the road.

Other Young and the Restless spoilers say Billy Abbott (Jason Thompson) will make his way back to Genoa City with Victoria Newman (Amelia Heinle). Since the gambling temptation was rough on Billy, he’ll decide to do something about it. Billy will attend a gamblers’ anonymous meeting and hope he can stay on the right track.

As for Victoria, she’ll join Nick Newman (Joshua Morrow) as they try to uncover their father’s mystery. They’ll locate Victor Newman (Eric Braeden) through a posted photo, but they won’t recognize the man who’s with him in New Zealand. The Young and the Restless spoilers say some Newman family shockers are brewing, so let’s hope this is part of Adam Newman’s (Mark Grossman) comeback.

Y&R viewers won’t want to miss the twists and turns ahead. We’ll give you updates as other news comes in. Stay tuned to the CBS soap and don’t forget to check CDL often for the latest Young and the Restless spoilers, updates, and news.