BY hellodrdavis on August 1, 2019 | Comments: 2 comments
Related : Soap Opera, Spoiler, Television, The Young and the Restless 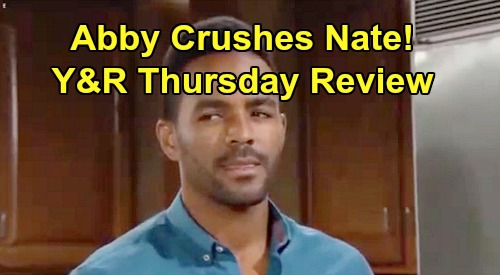 The Young and the Restless spoilers review for Thursday, August 1, tease that Sharon Newman (Sharon Case) will get some much-needed advice. She’ll bump into Mariah Copeland (Camryn Grimes) at Crimson Lights, and Mariah will immediately notice that something’s off with her mom. Talk will turn to Sharon and Rey Rosales’ (Jordi Vilasuso) break up, and it won’t be long before Mariah figures out that her mom’s behavior with respect to Adam Newman (Mark Grossman) was the cause.

Mariah will ultimately pull all of the details out of Sharon about the custody matter and how Sharon stepped in to help Adam. Mariah will note that previously Sharon had admitted that she still felt something for Adam, but Sharon will try to downplay that. Mariah will warn Sharon about Adam and about the need in general for her to say no to things that ruin the good things she has in life…like love.

Later, Sharon will be in the park when she runs into Nick Newman (Joshua Morrow), who’s out for a run. Sharon will face a tense interaction with him, just as she did with Mariah. She’ll immediately assume the Nick’s mad at her for stepping up for Adam in the custody matter, but Nick will tell her that he’s disappointed in her and deeply worried about her.

Sharon will protest any characterization of Adam as dangerous or predatory, which will upset Nick even more. They’ll go back and forth about whether Adam is a monster or not, and about whether Sharon knows what she’s doing, and in the end Nick will give her an ultimatum – that she needs to decide whether she’s going to be on Adam’s side or everyone else’s.

Well, ongoing Y&R spoilers indicate that Sharon will do exactly what everyone is telling her NOT to do, and that soon she’ll go running straight to Adam, even though it means she’s going to risk alienating herself from those in her life who really matter. According to Y&R spoilers, Adam and Sharon will spend more time together going forward, and eventually they’ll make love.

Meanwhile, on the new episode Y&R on Thursday, August 1, Abby Newman (Melissa Ordway) will struggle with commitment issues. As Y&R viewers know, she and Nate Hastings (Sean Dominic) had a romantic dinner planned at Nate’s place – complete with Nate doing all the cooking! Their date will get off to a great start as Nate impresses Abby with his culinary prowess. She’ll rate the meal highly and the two will flirt and enjoy each other’s company.

But things will take a dramatic turn when Nate invites Abby to go on a trip with him to the Grand Canyon to take in the stars. Abby will protest that she doesn’t want to be away from Society, and Nate will playfully push back, prompting Abby to blurt out that she’s not ready for commitment. Of course, this will confuse Nate, who will point out that Abby did invite him to a Newman family dinner, so taking a trip together isn’t really a big deal.

Ultimately, Abby will shut down and abruptly leave Nate’s house, leaving him puzzled. Later, she’ll send him a text saying casually that it was a great dinner and a great night, and asking if they can leave it at that for now. Nate will look completely rejected, and one wonders if he’ll be willing to put up with this kind of nonsense going forward.

After all, Abby could have just said that she was wasn’t ready to take a trip with him just yet – she didn’t have to act so strangely and bolt on their entire evening. It will be interesting to see what Nate’s next move will be – and whether Abby will ultimately offer an apology for such a strange move.