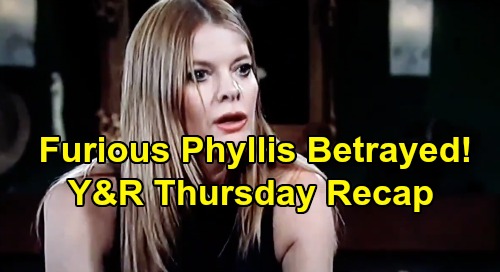 The Young and the Restless (Y&R) spoilers recap for Thursday, August 22, tease that Sharon Newman (Sharon Case) will tell Adam Newman (Mark Grossman) her answer is no. She can’t marry Adam and let herself fall back into an old version of herself. Sharon will remind Adam of his bad behavior lately, but he’ll think he can do better with her help.

However, Sharon will refuse to be the fixer. Y&R spoilers say Adam will think Sharon is in denial about what they share. He’ll feel like Sharon wants this deep down and will suspect Nick Newman (Joshua Morrow) is the problem here. Adam won’t think Sharon wants Nick to know how she really feels.

Sharon will maintain that her relationship with Adam is toxic and argue that she won’t cave to his pressure. Adam will finally get fed up, so he’ll shout at Sharon to leave. He’ll suggest she can just go back to her boring life without him. Once Adam’s alone, he’ll hurl a glass against the wall and shatter it.

Meanwhile, Nick will express his gratitude to Victor Newman (Eric Braeden) for pulling some strings on that restraining order. He’ll also want Grandpa to get in on Christian Newman’s (Alex Wilson) next visitation. Afterward, Nick will find a rattled Sharon in the park. He’ll feel like something’s bothering her, so they’ll head to the Dive Bar to talk.

Other Young and the Restless spoilers say Chelsea Newman (Melissa Claire Egan) will show up 30 minutes late for her meeting with Phyllis Summers (Michelle Stafford). She’ll plan to get some scalding coffee in case she needs to be armed. Chelsea will think Phyllis seems awfully desperate as she prepares to hear her out.

Phyllis will insist she’d like to offer Chelsea an investment opportunity. Chelsea will point out that Phyllis accused her of murdering her husband for this inheritance money. Nevertheless, Phyllis will press on and note that she needs a loan for the Grand Phoenix. She’ll mention that Abby Newman (Melissa Ordway) is the owner, so Chelsea will look thoughtful and opt to mull it over.

At Society, Chelsea will have a meeting with Abby. She’ll want to take Phyllis’ place in the deal and become the hotel manager herself. It’ll take some convincing, but Abby will get on board. Chelsea will assure Abby that she can handle Phyllis, so they’ll move forward with the deal.

Once Phyllis arrives, Abby will rescind her offer and reveal that she already made the deal with Chelsea. The Young and the Restless spoilers say Phyllis will fume and promise they’ll both regret it. She may be down, but she’s not out! Y&R fans can expect Phyllis to pull off some sneaky maneuvers soon, so she’ll still find a way to get in on this venture.

For now, Phyllis will want to unleash her anger. She’ll barge in Victor’s office and accuse him of blowing everything, but Vic will insist he’s innocent in the matter. Victor simply warned his daughter about what Phyllis had planned. They’ll argue before Victor insists Phyllis will go down right along with Adam.

Phyllis will counter that Victor’s the one who will fall. She’ll point out that it’s dangerous to mess with someone who has nothing to lose, but Victor will tell her to bring it on. As for Chelsea, she’ll call Adam to set up a meeting. Chelsea will think they need to come together and discuss what’s next regarding Connor Newman (Judah Mackey).

In the meantime, Nick will comfort Sharon over Adam’s proposal. She’ll explain that she turned Adam down, but she finds his view of them upsetting. Adam thinks they’re so similar, so Sharon won’t like the idea of having that same darkness within her. Nick will argue that Adam’s wrong about that. She’ll give Nick a hug as Chelsea and Adam appear on the roof deck.

On Kyle Abbott (Michael Mealor) and Lola Abbott’s (Sasha Calle), their snorkeling excursion will get rained out. They’ll remain in good spirits since they’ve got the rest of their lives for adventures together. Lola and Kyle will share different visions of the future, but Kyle won’t care how things turn out as long as he spends the rest of his days with Lola.