BY hellodrdavis on August 21, 2019 | Comments: one comment
Related : Soap Opera, Spoiler, Television, The Young and the Restless 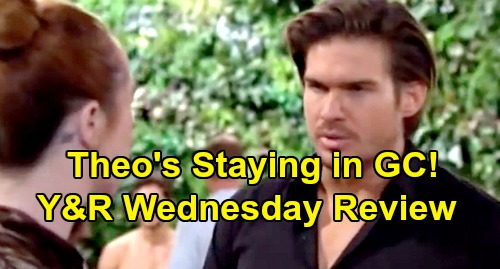 The Young and the Restless spoilers review for Wednesday, August 21, tease that Phyllis Summers (Michelle Stafford) will get summoned to a meeting at Crimson Lights by Billy Abbott (Jason Thompson). Billy, who’s unable to sleep and will be fresh from a family argument over the Abbott Exchange/Jabot merger, will want intel from Phyllis about what Adam Newman (Mark Grossman) is up to.

But since Phyllis is no longer working with Adam, she’ll play dumb and say she has no idea what’s on Adam’s agenda right now. She and Billy will end up having a rather tense exchange, culminating in Billy warning her to get on the right side of things or risk being collateral damage where Adam’s concerned.

But in the course of their conversation, Billy will mention that Chelsea Lawson (Melissa Claire Egan) has recently come into some money from her deceased husband, and that will give Phyllis an idea. Later, she’ll run into Adam and tell him that she’s on the verge of getting the funds for a stake in The Grand Phoenix hotel and plans on cutting Abby Newman (Melissa Ordway) out of the deal.

Phyllis will be unaware that Victor Newman (Eric Braeden) was listening to her conversation with Adam, and as she calls Chelsea to leave a message about a possible business venture, Victor will head to Society, where he’ll warn Abby about Phyllis’ plan to cut her out of the deal. Abby will seem nonplussed about the whole thing, but it will be clear that she’s planning on taking Phyllis on.

Of course, all of this will depend on Chelsea agreeing to work with Phyllis, but given that she’ll need a way to launder a portion of her money from Calvin Boudreau (John Burke), she just might agree to the deal. However, now that Abby’s been warned, it looks like she’ll take some preventive measures. Could we ultimately see a situation in which Abby, Phyllis, and Chelsea are partners together in the hotel?

Meanwhile, on the new episode of Y&R on Wednesday, August 21, Theo Vanderway (Tyler Johnson) will continue his reign of stirring up trouble. Devon Hamilton (Bryton James) will graciously offer Theo a full-time job at LP, but Theo will balk at the idea and pitch another one. He’ll want Mariah Copeland’s (Camryn Grimes) job as head of Power Communications.

After talking Mariah down to Devon, Theo will get a hard pass from Devon. Devon will suggest that Theo approach Mariah about possibly working for her, and Theo will let it be known that he now plans to make his home base in Genoa City.

Later, Theo will find Mariah at the rooftop bar, and he’ll pitch helping her out after pointing out how she recently lost a big client. Mariah will note that the she and the client mutually agreed they weren’t a good fit, and she won’t bow to Theo’s veiled criticism of her and the way she does her job.

Theo will go on to pitch that they open a line of communication between them so he can help her with what she’s “weak” at, and Mariah will turn the tables on him, realizing that she could easily

take his clients from his business right out from under him. She’ll tell him as much, and he’ll note that he “didn’t see that coming.”

As Mariah’s schooling Theo, Summer will show up and note that Theo’s losing his touch. They’ll banter back and forth a bit, and Summer will try to berate Theo for bringing Zoe Hardisty (Anna Grace Barlow) to Kyle Abbott (Michael Mealor) and Lola Abbott’s (Sasha Calle) wedding). But Theo will end up sweet-talking Summer, and he’ll point out that he did exactly what Summer wanted. They’ll kiss passionately, apparently back together again.