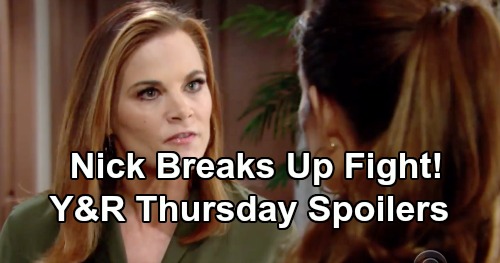 The Young and the Restless (Y&R) spoilers for Thursday, January 10, tease that the guests will start arriving for J.T. Hellstrom’s (Thad Luckinbill) memorial service. Victoria Newman (Amelia Heinle) understands that Reed Hellstrom (Tristan Lake Leabu) needs closure, but she’s still a little uneasy about this. After all, Victoria’s hosting this event in her own home – the very place where J.T. bit the dust!

Nevertheless, Victoria will don all black and get on with it. She’ll just hope to make this as quick and painless as possible. The last thing Victoria needs is more drama to deal with right now. She’s already stuck in major cover-up crew chaos and Victor Newman (Eric Braeden) has been charged with J.T.’s murder. Victoria will remain concerned about Nikki Newman’s (Melody Thomas Scott) health as well.

Of course, Victoria messy love life will be a problem. Cane Ashby (Daniel Goddard) will reluctantly attend the memorial service with the twins. Charlie Ashby (Noah Alexander Gerry) and Mattie Ashby (Lexie Stevenson) will feel like they’re showing Reed support when he needs them most. They won’t realize how awkward this is going to be for Cane and Victoria, the secret kissing enemies.

Victoria’s head will keep spinning over her feelings for Billy Abbott (Jason Thompson) and the fears that come along with pursuing them. While she’s trying to make sense of everything, she’ll deal with a face from J.T.’s past. The Young and the Restless spoilers say Mackenzie “Mac” Browning (Kelly Kruger) will show up to pay her respects to the dead – if J.T. is truly worm food as Y&R wants us to believe.

Regardless, Reed will be shocked to see Mac. He’ll probably thank her for coming and helping him say goodbye to his father. Reed never had that chance before J.T. died, so he’ll appreciate the opportunity to do it now. Better late than never!

Unfortunately, this gathering will come with some conflict. That’s to be expected when you put Victoria and Phyllis Summers (Gina Tognoni) in a small living room together. As they start bickering, Nick Newman (Joshua Morrow) will step in. He’ll play peacemaker and urge the ladies to get along for Reed’s sake. Nick will think they should put their issues on hold and just get through this as best as they can.

Phyllis and Victoria will attempt to do that, but total chaos will erupt by the end of the week. The Young and the Restless spoilers say this memorial service is set to blow up in a big way, so stay tuned. We’ll give you updates as other Y&R news comes in. Stick with the CBS soap and don’t forget to check CDL often for the latest Young and the Restless spoilers, updates, and news.