The Young and the Restless Spoilers: Thursday, January 3 – Nick and Victor Make a Deal – Jill’s Huge News – Reed’s Next Confession 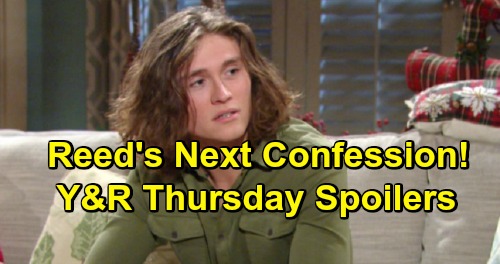 The Young and the Restless (Y&R) spoilers for Thursday, January 3, tease that Reed Hellstrom (Tristan Lake Leabu) will make another confession. He recently revealed the truth to Victoria Newman (Amelia Heinle), who intends to keep her son’s actions quiet. Reed was driving with a suspended license, so when you add that to his hit-and-run troubles it could mean major consequences.

Still, Reed will need to get this off his chest on Thursday’s new Y&R episode, January 3. There’s a chance Reed will go to Rey Rosales (Jordi Vilasuso), but confessing to his grandma sounds like a better option. Reed may visit Nikki Newman (Melody Thomas Scott) at the hospital and come clean about the whole ordeal. If so, he’ll undoubtedly express remorse and beg for Nikki’s forgiveness.

Of course, Nikki may admit she already knows. She was trapped inside her own mind for a while, but she was listening to her loved ones. Besides, Nikki understands that Reed isn’t a bad kid. He never wanted to hurt Nikki or cause such an uproar with the GCPD. If Reed tells Nikki the truth, you can bet she’ll respond with love and reassurance.

Other Young and the Restless spoilers say Nick Newman (Joshua Morrow) will make a deal with his father. During Nick’s next chat with Victor Newman (Eric Braeden), they’ll reach an understanding and discuss how to proceed. Perhaps Nick and Victor will agree that their family must be protected. While Victor is locked up, he may count on Nick to step up his efforts.

Victor and Nick won’t let any lingering issues get in the way. Now’s not the time to hold grudges. They’ll want to stand against the threat Nikki’s facing and stop Rey from tearing the Newman clan apart. Across town, Y&R fans will see a familiar face pop up. The Young and the Restless spoilers say Jill Atkinson (Jess Walton) will arrive with some surprising updates.

In addition to the news Jill plans to share, she’ll enjoy some visits with her loved ones. Both Billy Abbott (Jason Thompson) and Cane Ashby (Daniel Goddard) will get guidance before the week’s over. Jill is normally quite the meddler, but it seems her advice will be appreciated for once.