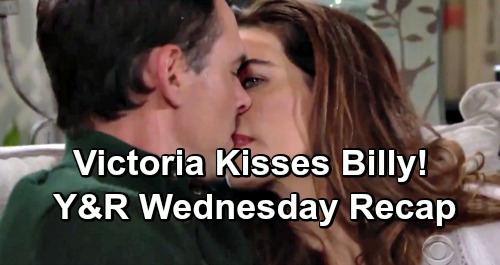 The Young and the Restless (Y&R) spoilers for Wednesday, January 2, tease that Victoria Newman (Amelia Heinle) will be rattled by her kiss with Cane Ashby (Daniel Goddard). After they pull away, Victoria will bolt out of the house and head back to her own. Cane will follow so they can discuss the lip lock and make sure it stays under wraps. He won’t want something like this to destroy his family.

Billy Abbott (Jason Thompson) will interrupt their conversation, so they’ll lie that it was about Reed Hellstrom (Tristan Lake Leabu) and Charlie Ashby (Noah Alexander Gerry). The Young and the Restless spoilers say Billy and Cane will end up arguing about the hit-and-run. Victoria will insist their private business doesn’t need to become public, so Cane will get the picture.

Afterward, Victoria will learn Victor Newman (Eric Braeden) was charged with J.T. Hellstrom’s (Thad Luckinbill) murder. She’ll tell Billy that her dad’s innocent, so he’ll do his best to support her. Y&R fans can expect their chat to end with a sweet kiss.

At the coffeehouse, Lola Rosales (Sasha Calle) will find Kyle Abbott (Michael Mealor) and Fenmore “Fen” Baldwin (Zach Tinker) bickering over her. She’ll snap that she doesn’t belong to anyone and push them to leave so she can work.

Kyle will be glum when he arrives at the athletic club. He’ll open up to Abby Newman (Melissa Ordway), so she’ll encourage him to keep trying with Lola.

Next, Abby will be enraged over Mariah Copeland’s (Camryn Grimes) GC Buzz report. After Mariah interviews Rey Rosales (Jordi Vilasuso) about Victor, Abby will rip into her. She’ll feel like Mariah made Victor look guilty, but Mariah will deny it. As their argument wraps up, Abby will insist that Mariah’s going to pay the price.

Mariah will feel horrible by the time she meets up with Tessa Porter (Cait Fairbanks). She’ll battle guilt since she knows Victor is innocent. Mariah will wish she could get this off her chest, but Tessa will remind her that her mom would land behind bars. Sharon Newman (Sharon Case) and the rest of the cover-up crew could all suffer.

Mariah will still be upset about keeping this massive secret. Tessa will suggest that Victor may not have committed this crime, but he’s gotten away with others. Mariah will think that’s a warped sense of justice, but Tessa will counter that it’s better for Victor to go down than Sharon!

Back with Abby, she’ll pester Rey until she scores a visit with her dad. Victor will promise Abby that his jam is only temporary. He’ll fret about bringing bad publicity for Abby’s new restaurant and promise that he’s always going to care. Later, Abby will argue that the charges won’t stick. She’ll tell Rey she plans to prove Victor is innocent.

At Crimson Lights, Kyle will approach Lola and ask her to help him understand her point of view. They’ll have a long talk about gifts and how Lola doesn’t want him to show his love that way. Kyle will admit it was typical in his own family, but he’ll want to honor her wishes. They’ll kiss and make up as Fen enters the patio door with a rose. Naturally, he’ll look disappointed.

Other Young and the Restless spoilers say Cane will speak to Charlie about Nikki Newman’s (Melody Thomas Scott) accident. Charlie will express remorse over his role in the hit-and-run drama. He’ll get a hug from Cane as he worries about Nikki’s fragile health.

Y&R fans won’t want to miss Wednesday’s fantastic episode. We’ll give you updates as other news comes in. Stay tuned to the CBS soap and don’t forget to check CDL often for the latest Young and the Restless spoilers, updates and news.