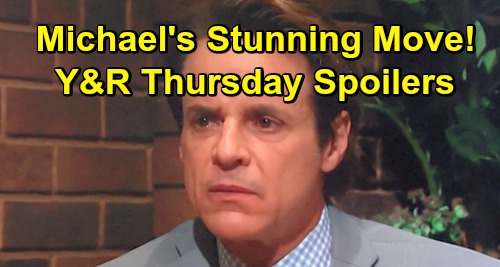 The Young and the Restless (Y&R) spoilers for Thursday, July 25, tease that Michael Baldwin (Christian LeBlanc) will decide to take care of business. He’s been tossing around threats and hoping to make Adam Newman (Mark Grossman) back off Kevin Fisher (Greg Rikaart). Of course, Adam’s just doing what he wants anyway. He’s not afraid of Michael or anyone else at this point.

In fact, Adam got Michael off Nick Newman’s (Joshua Morrow) case and still had Kevin doing his dirty work during the custody hearing. Michael wanted to get Kevin out of this mess, but he just got himself stuck in it instead. The Young and the Restless spoilers say Michael will make a bold move on Thursday. It looks like he’ll do something in hopes of gaining the upper hand on Adam.

Unfortunately, Michael’s plan will probably crash and burn. Y&R is seemingly setting Michael up to be the new DA – one who’s forced to do Adam’s bidding. In the meantime, Michael will keep drowning in Adam drama as he tries to save Kevin. He’ll undoubtedly dig his brother out of trouble eventually, but by then it may be too late to save himself!

Other Young and the Restless spoilers say Nate Hastings (Sean Dominic) and Abby Newman (Melissa Ordway) will feel the heat. After a little celebration with some friends, they’ll enjoy a private celebration of their own. Nate made his intentions crystal clear from the start, but it took Abby some time to warm up to the idea of dating. She’s had a lot of bad breaks in the romance department, so we get why she was wary.

However, Nate’s a great guy who seems all in on Abby. She’s finally accepted that this could really go somewhere, so she’ll surrender to the spark on Thursday. Nate will be happy to cave in as well. The Young and the Restless spoilers say they’ll have some very passionate moments, so they’ll reach a new level of closeness and keep things moving right along.

It sounds like a hot episode’s coming up. We’ll give you updates as other Y&R news emerges. Stay tuned to the CBS soap and don’t forget to check CDL often for the latest Young and the Restless spoilers, updates and news.