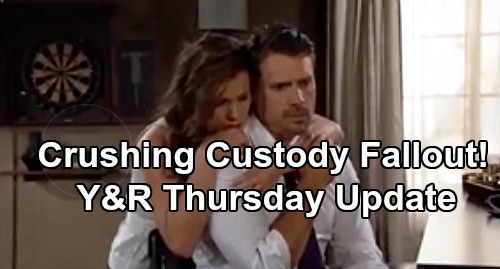 The Young and the Restless spoilers update for Thursday, July 25, tease that the judge in Christian Newman’s (Jamie and Alister Tobias) custody case will reach a decision about temporary guardianship – he’ll announce that Victoria Newman (Amelia Heinle) will care for the boy, and that both Adam Newman (Mark Grossman) and Nick Newman (Joshua Morrow) will be granted supervised visitations.

Nick will balk that Adam will have access to Christian, as he’ll worry about Adam trying to poison Christian against him. And Adam will later tell Sharon Newman (Sharon Case) that he doesn’t have high hopes for “justice” prevailing in the case. He’ll be clearly worried that he’ll ultimately be denied access to both of sons, and Sharon will worry about the rage she sees in Adam.

Ultimately, Christian will head to his Aunt Victoria’s while Nick breaks down and sobs. At the end of the day, both Adam and Nick will be shown in their respective residences drinking and contemplating the day’s events. Neither man will be happy, and Adam will seem particularly unnerved.

It seems pretty clear that both Nick and Adam will work on their agendas from here. Christian is slated to be in Victoria’s care for three months, at which point the judge will reconsider the matter. That gives Adam and Nick three months to fight and strategize against each other.

But since it seems that all the dirt is out there already – as the judge has heard about both Nick’s JT Hellstrom (Thad Luckinbill) impersonation and Adam’s role in Delia Abbott’s (Sophie Pollono) death – it will be interesting to see what the two men do now.

Meanwhile, on the new episode of Y&R on Thursday, July 25, Billy Abbott (Jason Thompson) will find himself in a bad place. He’ll be unnerved about all of the dreams and “messages” that it seems Delia has been sending him, and he’ll get some supportive words from Kevin Fisher (Greg Rikaart), who will strongly suggest that Billy get professional help.

Later, Billy will find himself drinking alone at Society, when Sharon comes along at just the right time. Billy will open up to her and reveal how he’s been feeling lately, and about the weird occurrences and his dreams about Delia. Sharon will be alarmed when he admits that he even got his hands on a gun and has fantasized about harming Adam.

He’ll assure Sharon that he’d never hurt himself or others, and she’ll think he could use a good counselor. He’ll balk at the idea and Sharon will agree to be his sounding board until he finds a professional to talk to. Later, Billy will visit Delia’s gravesite and tell her that he’s going to get help…when he suddenly hears her voice in his head say, “poor daddy.”

At this point, it’s looking like Billy’s difficulties are purely psychological in nature, understandably brought on by grief and the stress of having Adam back from the dead. Assuming that’s the case, he’ll probably reach a breaking point soon, and it may come at a time when he’s caring for Adam’s child in his own home. One can only imagine that this may cause Billy additional stress.