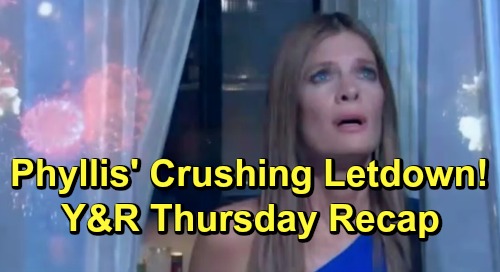 The Young and the Restless (Y&R) spoilers for Thursday, July 4, tease that Phyllis Summers (Michelle Stafford) will wake up in her suite and see that Summer Newman (Hunter King) already left. Soon after, Phyllis will catch up with Jack Abbott (Peter Bergman), who’ll admit Summer had a hangover and couldn’t offer input at their meeting.

Phyllis will whine about Summer only coming to her when she’s miserable. Of course, Jack won’t have any sympathy. He’ll think what Phyllis did for Summer last night was the equivalent of a parenting one-night stand. Jack will suggest a complete personality change is in order for Phyllis. He’ll think she needs to reset her life, but Phyllis will fire back about how wrong he is.

To prove it, Phyllis will push Jack to attend Adam Newman’s (Mark Grossman) party later that evening. She’ll think he should come see that she’s doing just fine. At home, Lola Rosales (Sasha Calle) will be under pressure. Celeste Rosales (Eva LaRue) will suggest it has to be difficult for Lola and Kyle Abbott (Michael Mealor). She’ll note that they have to sneak around for private romantic moments.

Lola will ultimately confess that they’ve been living together, but Celeste will admit she thought so. Y&R spoilers say they’ll bicker a bit over cooking before heading over to the Abbott mansion. After they arrive, Kyle will gush about how great it is to live with his family. Celeste, Lola and Traci Abbott (Beth Maitland) will all laugh once Kyle realizes Celeste knows the truth.

Fortunately, Celeste won’t hold a grudge over the lie. She’ll let Kyle know it doesn’t affect her view of him, but it also doesn’t change her plans. Celeste will still want to stay with Lola while she’s in Genoa City. Next, Celeste will be charmed by handsome Jack. He’ll give her a tour before they toast to their families coming together. Kyle will add a toast of his own about how he loves Lola and owes fate.

Afterward, Cane Ashby (Daniel Goddard) will head to the carnival with Traci. He’ll talk to her about a possible sequel to her novel since Flynn (Daniel Goddard) and Velma (Beth Maitland) have such good chemistry. Once Traci mentions going back to New York, Cane will admit he’s got a seminar there soon. He’ll think they should meet up while he’s in town, and Traci will agree that sounds nice.

At Adam Newman’s (Mark Grossman) penthouse, Phyllis will walk in and call out for him. She’ll find a note that says Adam will make it when he can. The party will get underway, but it won’t be a very festive event. Jack will compare it to a wake and point out that even Adam was a no-show. Lauren Baldwin (Tracey E. Bregman) will also take a few jabs about why there aren’t many attendees.

As for Phyllis, she’ll corner Michael Baldwin (Christian LeBlanc) and insist she knows Kevin Fisher (Greg Rikaart) was her kidnapper. Lauren will grow suspicious and ponder what’s up as she chats with Jack. The Young and the Restless spoilers say Phyllis will invite Summer to the party via voicemail, but Phyllis will end up watching the fireworks alone by the end of the night.

At the coffeehouse, Ana Hamilton (Loren Lott) will chat with Mariah Copeland (Camryn Grimes) and Tessa Porter (Cait Fairbanks). They’ll address Tessa’s music video, which is scoring lots of hits and getting great feedback. However, Ana will admit she moved forward without Devon Hamilton’s (Bryton James) knowledge. Mariah will think that’s crazy, but Tessa will suggest it was the right call.

Tessa and Ana will leave for the carnival, but Mariah will stay at Crimson Lights and advise Kevin. He’ll contend that he’s still dealing with quite a predicament, but he’s got a better attitude. Mariah won’t think the power of positive thinking is going to help, but they’ll end up putting the issue aside and dashing off to the carnival. Once they’re there, Mariah will mention Tessa’s viral video to Kevin.

When Ana and Tessa approach, Kevin will suddenly bolt and leave Mariah confused. He’ll return moments later after Tessa’s song plays and reveal that he paid them do it. The Young and the Restless spoilers say some fun scenes are ahead, so stay tuned. We’ll give you updates as other Y&R news comes in. Stick with the CBS soap and don’t forget to check CDL often for the latest Young and the Restless spoilers, updates and news.