BY Heather Hughes on June 19, 2019 | Comments: one comment
Related : Soap Opera, Spoiler, Television, The Young and the Restless 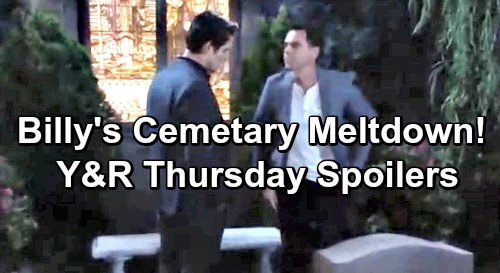 The Young and the Restless (Y&R) spoilers for Thursday, June 20, tease that Esther Valentine (Kate Linder) will have some concerns. She’ll feel like Kevin Fisher’s (Greg Rikaart) exhibiting some strange behavior, so she might mention it to Michael Baldwin (Christian LeBlanc). Esther will just want to help, but her nosiness could present some complications for these brothers.

While Kevin and Michael try to keep the Chloe Mitchell (Elizabeth Hendrickson) drama under wraps, Billy Abbott (Jason Thompson) will head to the cemetery. He’ll take a moment to remember Delia Abbott (Sophie Pollono), but Adam Newman’s (Mark Grossman) arrival will spell trouble. Adam was behind the hit-and-run accident that killed Delia, so Billy will think he has no business visiting her grave.

Of course, Adam may suggest he just wanted to reflect on the loss. He hasn’t been a very good person lately, but he’s not a total monster. Adam certainly has guilt over claiming the life of an innocent little girl. He might even apologize for intruding on Billy’s time there, but this bitter dad won’t want to hear it. Billy will remain furious with Adam over Delia’s death and all the chaos he’s causing now.

Other Young and the Restless spoilers say Devon Hamilton (Bryton James) will have a busy day. For starters, he’ll weigh in on that recent video collaboration. Mariah Copeland (Camryn Grimes) had the great idea to give listeners a taste of Tessa Porter (Cait Fairbanks) in her natural habitat. Ana Hamilton (Loren Lott) was on board, so Devon will be pleased that they all learned to work together.

However, Devon will be wary of letting Ana handle artists on her own. He may point out that Mariah did most of the work here. Ana will gripe about Devon’s lack of trust, so that should bring some stress in Thursday’s Y&R episode. Devon will face another round of conflict thanks to a disagreement with Nate Hastings (Sean Dominic).

Later, Devon will celebrate Neil Winters’ (Kristoff St. John) life with a special dedication. The stage at Society will be named in Neil’s memory, so that’ll be a big event for the people of Genoa City. Unfortunately, it’ll add to a pressure-filled evening for Devon. A vision of Hilary Hamilton (Mishael Morgan) will really push Devon over the edge.

By the end of the night, Devon will collapse onto a chair as his chest tightens. He’ll have a terrible panic attack, but Elena Dawson (Brytni Sarpy) will rush to his side and do her best to help. The Young and the Restless spoilers say Devon will take some deep breaths and calm down eventually. He’ll try to find stable ground again, but it should be tough when he’s still drowning in grief.

It sounds like a gripping episode’s coming up. We’ll give you updates as other Y&R news emerges. Stay tuned to the CBS soap and don’t forget to check CDL often for the latest Young and the Restless spoilers, updates and news.