BY Heather Hughes on May 15, 2019 | Comments: Leave Comments
Related : Soap Opera, Spoiler, Television, The Young and the Restless 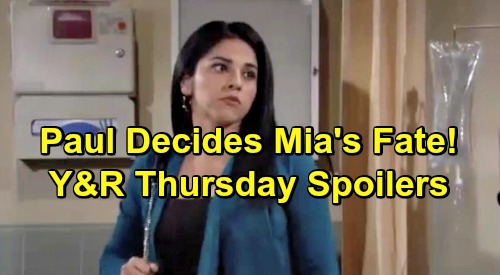 The Young and the Restless (Y&R) spoilers for Thursday, May 16, tease that Dr. Nate Hastings (Sean Dominic) won’t let Abby Newman (Melissa Ordway) forget about him. These two recently did a little flirting, but Abby was hesitant to dive into something new. She’s not sure she’s ready to date after the fiasco she faced with Arturo Rosales (Jason Canela), but she may change her mind soon enough.

Nate will turn on the charm once again this Thursday. He’ll make it clear that he’s feeling a spark and hope Abby’s willing to take the leap. Nate’s not asking for anything serious yet. He’d just like a go on a real date and get to know Abby a bit better. There’s a good chance Abby will grant that request, so we’ll see where this might lead.

Other Young and the Restless spoilers say Victor Newman (Eric Braeden) will tackle a crisis. He’ll try to get a grip on the chaos surrounding Adam Newman’s (Mark Grossman) return and hopefully bring the family together. Victor is thrilled to have Adam back in town, so he’ll hope to turn any lingering suspicions into love and acceptance.

Of course, rebuilding trust within the family will be difficult. That’s especially true since there’s a genuine reason not to trust Adam! Y&R viewers know Adam has a bag full of money and a secret partner he’s communicating with. Sharon Newman (Sharon Case) will spot the cash bag soon, so Adam will have to think fast and answer her questions. Since Adam is awfully smooth, he should be able to handle this with ease.

Later, Sharon will find herself in familiar territory. Something will happen that reminds her of a memory she made with Adam, so that could strengthen their bond. Over with Rey Rosales (Jordi Vilasuso), he’ll put Mia Rosales’ (Noemi Gonzalez) baby first. Rey obviously isn’t Mia’s biggest fan, but he’ll do whatever it takes to keep that kid from being born in prison.

That means making a passionate plea to Paul Williams (Doug Davidson) and hoping he understands. The Young and the Restless spoilers say Paul will be moved by Rey’s speech and decide it’s not worth pursuing. Besides, Lola Rosales (Sasha Calle) is the victim here. If she doesn’t want Mia to go down, Paul won’t think he should go against her wishes. He’ll ultimately drop the case and move on.

Mia and Arturo will be beyond grateful, so they’ll apologize to Rey and thank him while they await paternity test results. Will there be any surprises as Arturo and Mia’s joint exit approaches? We’ll give you updates as other Y&R news comes in. Stay tuned to the CBS soap and don’t forget to check CDL often for the latest Young and the Restless spoilers, updates, and news.