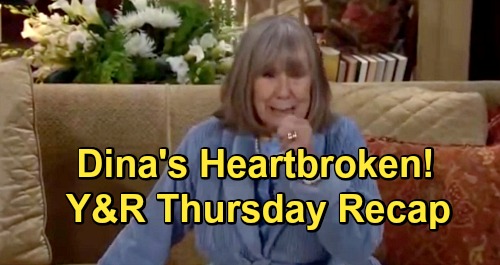 The Young and the Restless (Y&R) spoilers for Thursday, May 23, tease that Cane Ashby (Daniel Goddard) will get a call from Traci Abbott (Beth Maitland). She’ll wish him luck as he starts his new nonprofit organization position. Afterward, Cane will coach a parolee about an upcoming job interview.

Meanwhile, The Young and the Restless spoilers say Traci will get back to writing her book. She’ll switch to fantasy mode and imagine her character’s stumbling across a clue with Flynn (Daniel Goddard). Suddenly, Dina Mergeron (Marla Adams) will walk in and rant about not being able to locate the bathroom. She won’t think she’s home, so she’ll lash out when Traci tries to help.

At the hospital, Jack Abbott (Peter Bergman) will be pleased to see Adam Newman (Mark Grossman). He’ll wonder what’s in store for Adam now that he’s back. Adam will suggest that maybe Jack can help him figure this mess out. They’ll talk about Newman Enterprises and Victor Newman’s (Eric Braeden) intentions for Adam moving forward.

Jack and Adam won’t know if Adam’s supposed to be the golden boy or just spark some competition with Victoria Newman (Amelia Heinle). Either way, Jack will let Adam know he’s there for him. After Traci gets in touch about Dina, Jack will head out. Next, Paul Williams (Doug Davidson) will appear with a picture. He’ll note that the man in the photo came to the GCPD and confessed to shooting Adam.

After Adam checks out the pic, he’ll confirm that he won a bunch of cash from the guy. However, Paul will insist this isn’t over. He won’t think it all adds up, but Adam will grow frustrated. Adam will feel like Paul should accept the facts of the case. Paul, on the other hand, will simply hint that every winning streak comes to an end.

Once Jack gets home and helps Traci with Dina, they’ll revisit the topic of moving their mom to a facility. Traci and Jack will debate whether it’s still safe for Dina to be leaving in the Abbott house. It’ll be a tough decision, but they’ll ultimately agree that it’s time for Dina to go.

Cane will pop in next, so Traci will take a walk with him. He’ll support Traci as she opens up about the Dina situation and reveal that his first day on the job went well. After Cane mentions how wonderful Traci is, they’ll share a kiss…before Traci finds herself back in reality. The smooch was all in her head, but he’ll still get her all hot and bothered.

When Traci seems a bit frenetic later, Jack will wonder what’s up. He’ll eventually gears to Ashley Abbott (Eileen Davidson) and reveal that he called her home to help out with moving Dina. Nearby, Dina will eavesdrop out of sight. Back with Cane, he’ll be ecstatic when he meets up with the parolee he counseled earlier. He got the job, so Cane will be proud of him.

Other Y&R spoilers say Adam will return to the tack house after his release. He’ll text his secret partner that his plans have changed. Adam will explain that he’s not coming back to Vegas, so he’ll thank his ally and insist this is goodbye. At Newman Enterprises later, Adam will speak to Victor’s portrait. He’ll tell his father he’s about to let him down. Next, Adam will summon two people via text.

At Society, Abby Newman (Melissa Ordway) will angrily chop veggies as she vents to Dr. Nate Hastings (Sean Dominic). She’ll end up cutting herself, so the doc will patch her up. Nate will suggest he could be a friend if Abby needs one. She’ll decide maybe they could have a friendly dinner together, so Nate will love that idea.