The Young and the Restless Spoilers: Is Adam Newman Really Gabriel Bingham?

BY Bonnie Byrne on May 22, 2019 | Comments: one comment
Related : Soap Opera, Spoiler, Television, The Young and the Restless 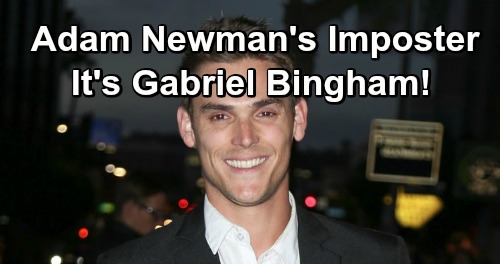 The Young and the Restless spoilers tease that Adam Newman (Mark Grossman) may in fact be an imposter. Victor Newman’s (Eric Braeden) son may actually be Gabriel Bingham.

Did Gabriel really die? After the horrific car crash that involved Billy Abbott (Jason Thompson), Adam supposedly had plastic surgery to look just like Gabe. He had died trying to save Adam after the car had plunged into a river. Poor Gabe’s heroic efforts had ultimately resulted in his own death, when he drowned after he pulled Adam out of the car.

Sage Warner (Kelly Sullivan) had covered for Adam when he arrived in Genoa City, pretending to be Gabe. Why did she do that? Was it because she knew that Adam really was Gabe? After all, she had been secretly married to Gabe and had been in love with him. So, it would make sense that she would continue to keep up Gabe’s ruse.

And what about Sage and Adam’s son Christian, who Nick Newman (Joshua Morrow) is currently raising as his own? Maybe Christian isn’t a Newman at all. Maybe, just maybe, he’s a Bingham.

Viewers are speculating that Gabe has come back not only to exact revenge on Victor but to also reclaim his son. But Victor might suspect the truth – that his son Adam isn’t really Adam.

After Adam was shot, Victor told Nate Hastings (Sean Dominic) to run some tests on his supposed son. When the results come in, will they prove anything? And what is Victor going to do if he finds out that Adam is really Gabe?

This begs another question – has the whole Adam storyline just been some long con that Y&R producers have teased viewers with for years? Did Adam really die in the car accident years ago and Gabe has been impersonating him all along? Or were both Adam and Gabe alive but Adam died in the cabin explosion?

Here’s another theory that will blow your mind. What if, right after Victor finds out Adam is an imposter, the real Adam shows up in Genoa City, and it’s Michael Muhney? Viewers will have to stay tuned to find out!