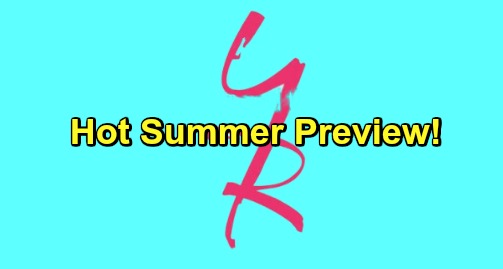 The Young and the Restless (Y&R) spoilers tease some hot drama’s coming up this summer. Genoa City will sizzle in more ways than one, so we’ve got a sneak peek at all the action. Here’s a summer preview so you’ll know what to expect for all your favorite characters.

First, let’s talk about Adam Newman (Mark Grossman) since everyone else is. He’s become quite the hot topic around town. The Young and the Restless spoilers say Adam will make even more of a splash as he sets out to reclaim what’s rightfully his. He’ll seek custody of Christian Newman (Jude and Ozzy McGuigen) and intensify his conflict with Nick Newman (Joshua Morrow) in the process.

Of course, Adam won’t forget about Chelsea Newman (Melissa Claire Egan) and Connor Newman (Gunner and Ryder Gadbois) either. He’ll do whatever it takes to find them, so that’ll lead up to Chelsea’s long-awaited return. Adam will also be investigated by Rey Rosales (Jordi Vilasuso), who’ll be working for someone in Genoa City. What Rey uncovers could blow up Adam’s life.

Rey and Sharon Newman (Sharon Case) will definitely face some friction as a result, but Rey’s little sis won’t be spared either. Lola Rosales (Sasha Calle) and Kyle Abbott (Michael Mealor) will deal with some challenges as they try living together. Cohabitating will test their romance, but so will Summer Newman (Hunter King). She’ll find ways to cause problems for “Kola,” but relief could be coming.

That’s because Summer and handsome Theo Vanderway (Tyler Johnson) will start a romance of their own. Will Summer find the true love she’s been seeking? Regardless, Summer will enjoy not having to chase the man she’s interested in.

Dr. Nate Hastings’ (Sean Dominic) chase will also come to an end. Abby Newman (Melissa Ordway) will begin opening her heart to the hunky doc, but they’ll keep it light and fun at first. Nate and Abby will have their summer fling, but maybe it could turn into something deeper by the time fall rolls around.

Over with Mariah Copeland (Camryn Grimes) and Tessa Porter (Cait Fairbanks), finding the right work and personal life balance will be difficult. There’ll be more tension between Mariah and Ana Hamilton (Loren Lott), but don’t get the wrong idea about where it’s coming from. Mariah’s insecurities are the driving force behind this – although Ana’s pride isn’t helping.

Ana clearly has some ill-advised plans for Tessa’s music career, but it’s not Mariah’s place to butt in and tell Ana how to do her job. After all, Mariah wouldn’t like it if Ana showed up uninvited at GC Buzz meetings and shot down all her segments. Even Mariah admitted to acting like a “stage mom from hell,” but that won’t stop other issues from arising.

We sympathize with Mariah for worrying Tessa’s success will change things, but Ana has a good reason to be irritated and that’s why she’ll push back. Tessa will be forced to take a stand and settle them down, but the stalker situation should become the priority eventually.

Y&R may just be holding off on the big stuff until Kevin Fisher (Greg Rikaart) hits town again. The stalker drama definitely seems like something he could look into for his old bestie, Mariah. Kevin will also revisit his dark side – presumably in a way that’s connected to all the Adam chaos. Michael Baldwin (Christian LeBlanc) will follow Kevin’s lead and head into the darkness this summer, too.

That’ll naturally lead to problems with Lauren Baldwin (Tracey E. Bregman), so Jack Abbott (Peter Bergman) may be Lauren’s shoulder to cry on. Meanwhile, Cane Ashby (Daniel Goddard) and Traci Abbott (Beth Maitland) will create buzz as they straddle the line between friends and more than friends.

Finally, The Young and the Restless spoilers say Phyllis Summers (Gina Tognoni) will find a stunning ally. Adam will find one as well, so Phyllis seems like the perfect fit. Y&R fans will be eager to see what this dynamic duo cooks up.

That’s it for your summer preview! We’ll give you updates as other Y&R news comes in. Stay tuned to the CBS soap and don’t forget to check CDL often for the latest Young and the Restless spoilers, updates, and news.