The Young and the Restless Spoilers: Thursday, May 23 – Jack Reunites with Adam – Nate Wins Abby Over – Traci’s Feelings for Cane Grow 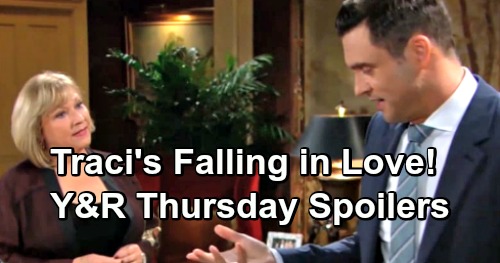 The Young and the Restless (Y&R) spoilers for Thursday, May 23, tease that Dr. Nate Hastings (Sean Dominic) will step up his efforts to sweep Abby Newman (Melissa Ordway) off her feet. To start, Nate would just like to score a date with the lovely Newman. His persistence will finally bring positive results soon, so that’ll kick off a summer of flirty fun for this duo.

Meanwhile, Traci Abbott (Beth Maitland) will continue to battle some complicated feelings. She’s clearly got a crush on her close pal, Cane Ashby (Daniel Goddard). Traci never expected all that bonding to lead her down this path, but here she is. She can’t help it if she finds Cane charming and sexy.

Traci may try to shove her growing feelings aside, but it’ll be tough when Cane keeps turning to her for support. Of course, Cane will also give Traci support in return, which will only make Traci’s feelings stronger. Cane has taken an interest in Traci and shown that he cares, so it’s easy to see why this is becoming a little more than friendly for her.

The Young and the Restless spoilers say Traci will get another dose of inspiration thanks to Cane on Thursday’s new Y&R episode, May 22. She’ll get back to that book she’s writing, which began as Flynn (Daniel Goddard) and Iris’ (Christel Khalil) complicated love story. Now that Traci has a character based on herself in the mix, what are the chances Flynn’s sassy secretary will win his heart? We’d say pretty good at this point.

Over with Jack Abbott (Peter Bergman), he’ll have a long-awaited reunion with Adam Newman (Mark Grossman). Unlike Billy Abbott (Jason Thompson) and so many other Genoa City residents, Jack won’t want to spew hatred at Adam. Jack and Adam had a nice bond once upon a time, so they’ll enjoy coming together again and catching up.

However, Jack may have concerns about Victor Newman’s (Eric Braeden) grip on Adam. He won’t want Victor molding Adam into someone he shouldn’t be, but Adam may promise to be careful. Y&R fans know Adam’s got an agenda of his own, so maybe Victor’s the one who should be worried!