The Young and the Restless Spoilers: Thursday, November 28 Review – Connor Has PTSD – Colin and Cane Will Scam Outcome 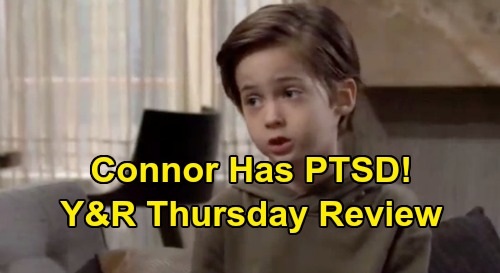 The Young and the Restless spoilers review for Thursday, November 28, tease that Devon Hamilton (Bryton James) and Elena Dawson (Brytni Sarpy) will get a visit from Chance Chancellor (Donny Boaz) and Amanda Sinclair (Mishael Morgan), with Cane Ashby (Daniel Goddard) showing up shortly thereafter. As it turns out, Colin Atkinson (Tristan Rogers) will have been arrested, but he’ll have hidden the money somewhere unknown.

After updating Devon about all of this, Chance will leave, and Devon will lay into Cane for being in cahoots with Colin. Cane will profess his innocence and will say that he’d never disrespect Katherine Chancellor (Jeanne Cooper). Devon won’t believe him, and he’ll then turn on Amanda, accusing her of working with Cane on the con.

Amanda will deny everything as well, prompting Elena to step into the argument and things will get ugly. Ultimately, Cane will cut off the argument and will say that in the spirit of the upcoming holiday, he’ll track down the money so that the person Katherine intended it for can have it. Interestingly, though, he won’t say who that person is.

Meanwhile, Abby Newman (Melissa Ordway) will talk with Phyllis Summers (Michelle Stafford) at The Grand Phoenix. Phyllis will think that the hotel guests who lost their jewels might be making up their story, since they can’t even seem to describe what was stolen. Abby will point out that Phyllis’ security system couldn’t even capture the theft, so something is awry here.

It won’t be long before Abby gets word that another hotel room was robbed. She’ll tell Phyllis, who at first will think it’s a joke. They’ll run off to try to figure out what to do. While this is going on, Chance will bump into Adam Newman (Mark Grossman) at Society. Adam will say that he figured Chance would be out working on his next big case, but Chance will say that what happened in Las Vegas was a game changer.

Chance will thank Adam again for Vegas and say that he owes him, and Adam will note that they helped each other out, but that he doesn’t want to be reminded of what went down in Nevada. Before Adam leaves, he’ll tell Chase that they need to “keep it buried in the desert where it belongs.”

From there, Chance will head back to The Grand Phoenix, where he’ll hear about the newest robbery from Abby. He’ll say that he was going to leave town, but that now he’d stick around and help her out. He’ll then get a call from Colin, who will have escaped custody and is about to hop on a flight to parts unknown. Chance will be furious that Colin is now on the lam.

Sharon will then talk alone with Connor, and she’ll be alarmed to hear him talk about how the monster is strong and that he feels like he’s not safe. Later, Sharon will tell Adam and Chelsea that Connor is suffering from PTSD and that the monster in his dreams represents what happened on the day of the hostage standoff. Sharon will recommend intense therapy and perhaps medication.

All of this will prompt Adam to suggest that Chelsea move into the penthouse permanently. That will rattle Chelsea, who will wonder if Adam is suggesting this because of Nick Newman (Joshua Morrow). But Adam will say that his era of fighting with his family is over, and that they need to put Connor first. He’ll ask her directly which is more important – Connor or Nick?