The Young and the Restless Spoilers: Thursday, November 7 Review – Billy’s Paranoia Resurfaces – Theo Considers His Place In The Abbott Family 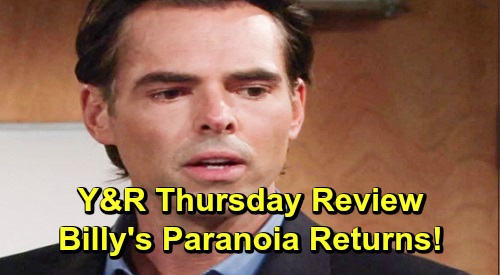 The Young and the Restless spoilers review for Thursday, November 7, tease that Billy Abbott (Jason Thompson) will have all sorts of nervous energy. He’ll arrive at Newman Enterprises with Victoria Newman (Amelia Heinle) and be overly amorous with Victoria, who will put him off. He’ll bring up with situation with Katherine Chancellor’s (Jeanne Cooper) will and how Devon Hamilton (Bryton James) gave Cane Ashby (Daniel Goddard) his money, and he’ll be pretty agitated about it.

Victoria will wonder why Billy is getting all worked up about the issue, and Billy will insist that Cane must be conning Devon somehow. Victoria will worry about his anger over the situation, but Billy will deflect and get amorous again, and they’ll leave things on a playful note. Still, Victoria will remain worried about Billy’s anger, as she’ll later tell Nikki Newman (Melody Thomas Scott) about her fears.

Victoria will tell Nikki that it was like hearing the news about Cane getting Devon’s money somehow triggered Billy’s pent-up frustration. Nikki will tell Victoria not to ignore her gut, but Victoria will downplay the situation and decide that she’s overreacting. After all, she’ll note that Billy’s been doing much better and he’s really working on himself in therapy.

Later, Billy will arrive at Jabot to find Kyle Abbott (Michael Mealor) there. Billy will be high-energy and will launch into how he sympathizes with Kyle about the Theo Vanderway (Tyler Johnson) situation. Billy will state that he doesn’t have a good feeling about Theo and that he’s suspicious of him, and he’ll ask Kyle if Theo might have targeted Kyle in New York because he’s an Abbott.

Kyle will seriously doubt that, given that Jack Abbott (Peter Bergman) and Traci Abbott (Beth Maitland) were the ones who discovered Theo’s status as an Abbot. Billy will then compare Theo’s situation to Cane’s old con on the Chancellor family. He’ll rant about Cane, and Kyle will try to explain that Theo is different because he’s a known quantity.

Still, Billy will advise Kyle to keep his distance from Theo and to try to get through to Jack so that Theo can’t take advantage of their family. Kyle will think that Theo is more of a nuisance than a threat, but Billy will say that Kyle wrong and that Theo is definitely a threat. After Kyle leaves, Billy will find a piece of gum in the desk drawer and throw it in the trash.

Clearly, the situations with Cane and Theo are triggering something in Billy, as his whole persona seems to have shifted to one of paranoia and aggressive energy. It seems that his trigger is any perceived threat, and this situation with Theo is starting to bring out that dark side of him again. It will be interesting to see how he handles things going forward, but it’s noteworthy that he doesn’t see what’s happening to him in the way that Victoria does.

Meanwhile, on the new episode of Y&R on Thursday, November 7, Theo will be feeling down and out after an influencer refuses to work with him, when Jack calls and wants to meet. The two will sit down for a chat, and Theo will wonder if Jack thinks that he’s a threat to the Abbott family. Jack will not think that at all – in fact, he’ll want to help Theo feel more connected to the family.

Later, Theo will read an article on his tablet about the recent Jabot merger, and he’ll look thoughtful. One wonders whether Theo will decide that he wants a piece of the Abbott family business. He certainly doesn’t seem at all like he’s interested in Abbott money, but at the same time he’s pretty down and out right now. Jack would probably be amenable to welcoming Theo into Jabot, but it would clearly cause a huge problem for Kyle – and it could cause a complete mental health crisis for Billy.