The Young and the Restless Spoilers: Double Danger for Adam – Billy’s Gum-Chewing Alter Is Back, Vicious Simon’s Out for Blood 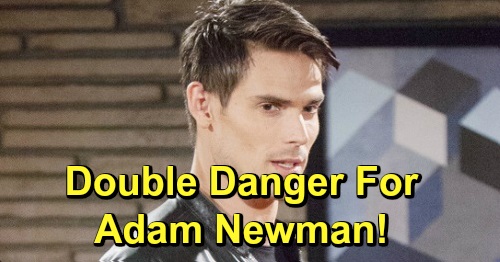 The Young and the Restless (Y&R) spoilers reveal that Billy Abbott’s (Jason Thompson) about to rejoin the dark side. He’ll be back to popping sticks of gum and chewing away during the week of November 11-15. Unfortunately, that means Billy’s alternate personality will return, which is baffling in some ways and expected in others.

Y&R gave Thompson a whole episode devoted to fighting off his inner demons. They made such a big to-do about this standalone ep that it truly felt final. It seemed like The Young and the Restless was closing the door on the Delia Abbott (Sophie Pollono) grief chapter – and most of us can agree, it’s way past time. No other deceased characters get this much attention.

However, Billy just can’t let go of his hatred for Adam Newman (Mark Grossman). We can certainly understand that Billy’s suffered a horrible loss, which has shaped him forever. We can also understand why Billy would loathe Adam for causing his child’s death. Even so, Billy’s revenge mission is excessive considering Delia’s demise was a terrible accident – unlike Billy’s actual murder attempt on Adam.

Of course, there were eventually signs that dark Billy would make a comeback. For starters, Victor Newman (Eric Braeden) gave Billy another chance and urged him to use it wisely. He later suggested he wouldn’t be so forgiving if Billy went down the same dark road, which suggested Billy would indeed head down that road again.

There was also a warning from Billy’s therapist. She insisted that even the smallest thing could trigger Billy. It’s clear that Billy’s been letting his guard down and that can only spell trouble. When Adam confronted him about that murder attempt, Billy agreed that they should stay out of each other’s way. Sadly, the look he flashed Adam afterward let us know this battle wasn’t over just yet.

The Young and the Restless spoilers say the drama at Jabot could help fuel Billy’s anger and desire for power. He’s struggled to control his disturbing impulses, but he feels control in a way when he’s dark Billy. Although Billy isn’t really in charge of his actions in that state, it undoubtedly gives his subconscious comfort somehow. It’s his chance to feed that need for vengeance – the one he always fights in regular Billy mode.

Adam could be at risk, and there may not be a Chloe Mitchell (Elizabeth Hendrickson) around to stop Billy this time! The Young and the Restless spoilers say Adam could also face peril thanks to Simon Black (Jeffrey Vincent Parise). Due to the threats against Connor Newman (Judah Mackey), Adam will soon get involved in Chelsea Newman’s (Melissa Claire Egan) mess.

Between Billy and Simon, there’ll be double the danger for Adam! We’ll give you updates as other Y&R news comes in. Stay tuned to the CBS soap and don’t forget to check CDL often for the latest Young and the Restless spoilers, updates and news.