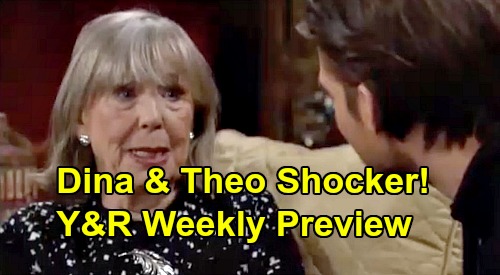 The Young and the Restless (Y&R) spoilers preview for the week of November 4-8 tease that some stunning moments are coming up. First, Theo Vanderway (Tyler Johnson) will introduce himself to Dina Mergeron (Marla Adams) at the Abbott mansion. He’ll tell Dina his name and insist it’s nice to meet her.

Dina doesn’t have too many lucid moments these days, but she can recall certain things on occasion. She gushed about the dreamy newspaperman Stuart Brooks, which is what led to Jack Abbott (Peter Bergman) and Traci Abbott’s (Beth Maitland) half-brother discovery.

Of course, that half-brother is Eric Vanderway (Jon Briddell), Theo’s father. That makes Theo Dina’s grandson, so Jack may think it’s time for them to meet – even if she can’t quite understand. Dina will get choked up at the mention of the name “Vanderway.” Despite her Alzheimer’s, it appears Dina will remember the name of the baby she gave up for adoption.

Theo may get a sweet scene with Dina before her mind drifts off again. You can bet Kyle Abbott (Michael Mealor) won’t approve of all this. He’ll end up sparring with Jack this week, so he may think Dina doesn’t need the added stress. Kyle’s protective of Dina, especially when it comes to people he views as vultures!

Other Young and the Restless spoilers say Kyle will have a confusing encounter. He’ll bump into Mariah Copeland (Camryn Grimes) and Tessa Porter (Cait Fairbanks) at Society, where Tessa will be acting rather peculiar. At Mariah’s urging, Tessa will have a blindfold and headphones on. It’ll leave Tessa bewildered in the dark, but it’s all part of Mariah’s big surprise.

Mariah won’t want Tessa to figure out where they are or where they’re going. She’ll contend that Tessa doesn’t know it yet, but her girlfriend’s about an hour away from having her mind blown. November sweeps spoilers point to a one-year anniversary celebration for Mariah and Tessa, so that may be what Mariah’s planning. Mariah knows Tessa better than anyone, so Tessa should love whatever’s in store.

Other Young and the Restless spoilers say Simon Black (Jeffrey Vincent Parise) will rev up his threats. He’ll tell Chelsea Newman (Melissa Claire Egan) she’s got 24 hours to deliver the money her dearly departed husband owed him. Unfortunately, Chelsea won’t be able to get her hands on the laundered dough. The bank account’s been seized by the Feds, so what’s Chelsea going to do?

Chelsea will have to think of something fast or else Simon could strike. Y&R fans can expect Adam Newman (Mark Grossman) to get involved eventually. He’ll come to Chelsea’s rescue during November sweeps, which will drive Nick Newman (Joshua Morrow) up the wall.

In the meantime, Abby Newman (Melissa Ordway) will sense some drama. She’ll beg Chelsea to tell her trouble isn’t brewing, but Chelsea will put on a smile and pretend it’s all good. Abby will be encouraged to let Chelsea handle this, but concerns will remain. Phyllis Summers (Michelle Stafford) will follow a trail that could add to Chelsea’s woes soon enough!