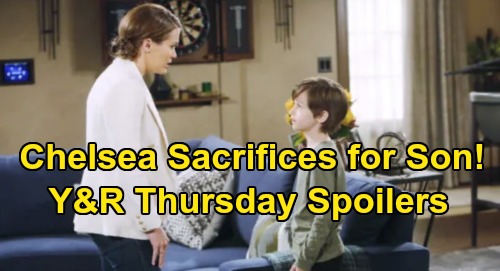 The Young and the Restless (Y&R) spoilers for Thursday, October 10, tease that Phyllis Summers’ (Michelle Stafford) curiosity will grow. Cane Ashby (Daniel Goddard) shows up in Vegas on Wednesday, so he’ll be pretty curious as well. He was looking for Adam Newman (Mark Grossman), but he wasn’t expecting to encounter Phyllis in Sin City.

When pressed on Thursday, Phyllis will confess she overheard Cane planning this trip. She’ll suggest she decided to meet up with Adam first and see what information she could gather. Cane may feel like Phyllis is being too nosy, but she won’t see it that way. Phyllis will think Cane’s being suspiciously secretive instead, but he’ll remain tight-lipped about his reason for contacting Chance Chancellor.

Later, a text will come in from Chance, so Cane will take that as his cue to leave. The Young and the Restless spoilers say Cane will arrive for their meeting, but he’ll soon realize it was all a ploy. Someone will sneak up behind Cane and bash him in the head, which will set up a quick abduction. It won’t be long until Cane’s being held somewhere and wondering what his next move should be.

Chelsea Newman (Melissa Claire Egan) will face a dilemma of her own back in Genoa City. She’ll choose to make a sacrifice – most likely for Connor Newman’s (Judah Mackey) sake. If Connor’s having a particularly rough time at Nick Newman’s (Joshua Morrow) place, Chelsea may consider moving out for a while.

Then again, Chelsea might want to track Adam down and practically force him to be a father. If Chelsea lives near Adam, he’d be more inclined to spend time with his son. Chelsea could wear Adam down eventually. She might even want to leave town without finding Adam. Chelsea vowed not to run away, but it’s not really running if Chelsea simply decides to move elsewhere and tells Nick where she’s going.

Whatever the case, Chelsea will feel like she has to do what’s best for her son. It’s too bad she’s not even sure what that is! Of course, Chelsea will ultimately remain in GC and Adam will make a comeback, too. Connor will have both his parents back in his life sooner or later, so let’s hope that’ll help the kid out.

In the meantime, it looks like Adam will have another problem on his hands. He’ll feel stuck in some tricky situation, so this may have something to do with Cane’s kidnapping. Whether this involves Chance or someone else, Adam might have to step in and handle some drama.

Finally, Y&R spoilers say Kyle Abbott (Michael Mealor) will deliver a warning. He’ll insist Summer Newman (Hunter King) should be careful when it comes to Theo Vanderway (Tyler Johnson). Kyle’s bad feeling regarding Theo is nothing new, but his concerns may be growing. That could be partially due to all this bonding he’s been doing with Summer.

The more Kyle cares, the more worried he’ll be for his ex. Kyle will just think Summer has to watch out for herself and protect her heart. He may argue that heart’s already been through a lot – some of it thanks to their failed marriage. Kyle won’t want any trouble for Summer, which is why he’ll encourage her to keep her guard up. He’ll believe Summer deserves far better than Theo.