BY hellodrdavis on October 10, 2019 | Comments: one comment
Related : Soap Opera, Spoiler, Television, The Young and the Restless 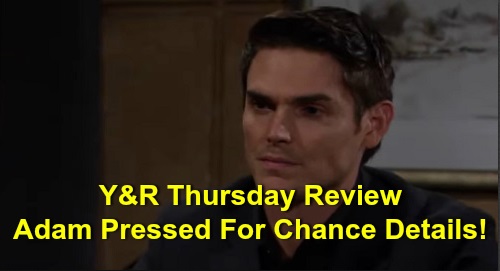 The Young and the Restless spoilers review for Thursday, October 10, tease that Phyllis Summers (Michelle Stafford) will be intrigued as Cane Ashby (Daniel Goddard) enters the hotel suite where Adam Newman (Mark Grossman) has just finished his poker game. They’ll chat a bit, and Phyllis will blurt out that Cane’s there in Las Vegas looking for Chance Chancellor (John Driscoll). Adam will wish him luck and say that he can’t help him.

When Adam steps out to lock up his poker winnings, Phyllis will pounce on Cane, wanting to know why he’s looking for Chance. He and Phyllis will banter a bit, but Cane won’t spill his reasons for wanting to find Chance. He’ll draw out of her that she noticed Riza Thompson (Tina Casciani) and Chance together before in Vegas, and that she then met with Riza who wasn’t at all chatty.

Adam will then return to the room and Cane will needle him about where Chance is. He’ll point out to Adam that his connection to Chance is really going to start interesting people back home, including the police, since Cane dropped a bombshell on his family before he disappeared, and that this could become a missing persons case. Phyllis won’t know what on earth Cane is talking about and she just won’t understand Chance being involved in anything sketchy.

After Cane finally leaves, Phyllis will try to get information out of an exasperated Adam about the big bombshell that Chance dropped on his family, but Adam will play dumb about the whole thing. He’ll say that he has no idea how or why Chance blew up his family and that he has no interest in finding out why. He’ll proclaim to be done with Genoa City, but Phyllis will insist that she’s not going to let this go before she finally leaves.

Next, on the new episode of Y&R on Thursday, October 10, Chelsea Lawson (Melissa Claire Egan) will arrive home with an angry and defiant Connor Newman (Judah Mackey). She’ll have picked him up from school after he exhibited disruptive behavior in class. Chelsea will be very upset and will call Sharon Newman (Sharon Case) for help. Sharon will arrive later and think that Connor might have anxiety over the possibility of being abandoned, like he was abandoned by Adam.

Sharon and Connor will end up talking, and they’ll get along pretty well. They’ll talk about Faith Newman (Alivia Alyn Lind) and how she’s been feeling upset about being lied to – something that Connor will seem to relate to. But Connor will refuse to admit that he’s upset, and he’ll stuff his feelings and claim to be ok. When Chelsea returns with Nick Newman (Joshua Morrow), Sharon will explain to a worried Chelsea that they made progress, but Connor is still holding back.

Chelsea’s concerns seem understandable, but chances are, Connor is just experiencing some temporary problems as a result of a lot of abandonment from the key adults in his life in a short amount of time. He lost Calvin Boudreau (John Burke), his father, and he was led to believe that he lost his grandfather all in short order. It’s a lot for a little kid to handle, and he probably just needs some time and perhaps some professional counseling.