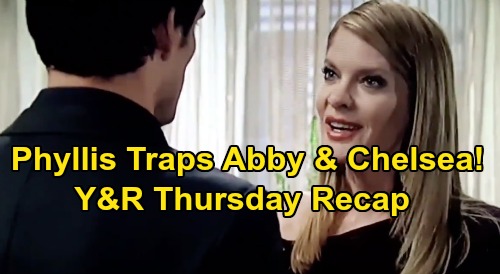 The Young and the Restless (Y&R) spoilers recap for Thursday, September 12, tease that Chelsea Newman (Melissa Claire Egan) will worry about lack of evidence. Zoe Hardisty (Anna Grace Barlow) is the prime suspect in the mass drugging, but Chelsea will fear there’s no way to prove it. She’ll fret to Nick Newman (Joshua Morrow) about the damage that’ll be done if this drags on and on.

While Nick reassures Chelsea, Nate Hastings (Sean Dominic) will do the same for Abby Newman (Melissa Ordway). Y&R spoilers say Abby will get some bad news from Paul Williams (Doug Davidson). He’ll reveal that the security footage wasn’t helpful, which leaves them without definitive proof. Abby will fume since all her hard work could go up in smoke, but Nate will think she can turn things around.

Abby will also receive a text from Phyllis Summers (Michelle Stafford), which will insist they need to talk. The Young and the Restless spoilers say Chelsea will get one as well. It’ll suggest Phyllis is the key to getting them out of their jam. After Abby joins Chelsea at Nick’s place, they’ll agree they can’t deal with Phyllis’ drama right now. However, Phyllis will have other ideas!

After filling Adam Newman (Mark Grossman) in on her advantage, Phyllis will surprise Abby and Chelsea. She’ll contend that Zoe indeed spiked the signature drinks, and she can prove it. Phyllis will want a stake in the hotel, but Abby will demand to see this proof of hers first. Phyllis will play Zoe’s recorded confession and show off security footage she hacked. Abby will think it’s appalling for Phyllis to cover up Zoe’s crime and use it for selfish gain.

Of course, Phyllis won’t care as long as she gets her stake. It’ll take some negotiating, but Chelsea and Abby will agree to give her 25 percent. Phyllis will reveal that she came prepared with a contract, so they’ll get this done on the spot.

Over with Rey Rosales (Jordi Vilasuso), he’ll learn something strange about the security footage. Paul will note that a portion of it was deleted, which Zoe doesn’t seem capable of. After Phyllis contacts Paul, another setup will get underway. Phyllis will summon Zoe to the Grand Phoenix, so the blogger will assume she wants to talk business. Zoe’s in for a shock when Rey and Paul pop out to arrest her!

Abby and Chelsea will take in the scene nearby. After Abby suggests Zoe’s famous now, Zoe will spell her name to reporters and get hauled to the station. That’ll leave Phyllis to suggest that’s what happens when you cross Phyllis Summers. She’ll break out the bubbly and suggest a title for herself: Chief Executive in Charge of Security. Abby and Chelsea won’t be thrilled about this partnership, but they’ll toast to it anyway.

At Crimson Lights, Sharon Newman (Sharon Case) will have an awkward chat wit Rey. She’ll be embarrassed over kissing Rey, but he’ll point out that they were under the influence. It’s not like Rey was quick to pull back. He’ll think the outcome could’ve been worse, and Sharon will back him up on that.

Rey will also get updates on Sharon’s road trip. He’ll subtly try to find out if she’s going with Adam, but Sharon will insist it’s a solo gig. Since Phyllis will tell Adam about Sharon’s medical scare, he’ll track her down and offer to help. Sharon will assure Adam that she can take care of herself. She’ll mention the trip she’s taking before she exits. Adam will sport a smile as Sharon walks away.

Other Young and the Restless spoilers say Victoria Newman (Amelia Heinle) will await an important phone call. When that call comes in, Victoria will hope the person on the other end has found Billy Abbott (Jason Thompson). At the ranch, Victor Newman (Eric Braeden) will be frustrated over his health setback. He’ll urge Nikki Newman (Melody Thomas Scott) not to tell the kids about it.

Nick will be curious about Victor’s condition when he arrives, but Victor will shift the subject to Summer’s drugging. They’ll also discuss the crisis Abby and Chelsea are facing. Soon after, Victoria will appear and explain that Billy still hasn’t been found. She’ll be concerned when Victor grows weak, so Nikki will suggest he hasn’t been feeling the greatest.

Since Victor won’t want to visit the hospital, Nate will be called again. He’ll give Victor an exam before revealing that his test results are ready. Back with Adam, he’ll play gin with Connor Newman (Judah Mackey) at home as they continue to bond. Connor will feel like everything’s fun with his dad. He’ll wish his parents would reunite, but Adam will assure Connor that he’ll still be a huge part of his life.