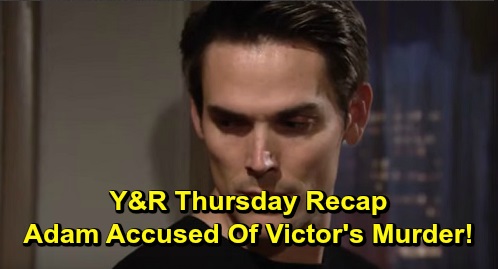 The Young and the Restless (Y&R) spoilers recap for Thursday, September 19, teases that Traci Abbott (Beth Maitland) and Jack Abbott (Peter Bergman) will discuss Victor Newman’s (Eric Braeden) death. They’ll acknowledge that Ashley Abbott’s (Eileen Davidson) still in shock over the news. Victor was a big part of Ashley’s life – and the same goes for Jack. He’ll admit it was motivating to have Victor as an adversary.

Traci will push Jack to admit he’s going to miss Victor. Jack will confess that he already does. They’ll also talk about the last part of Colleen Carlton (Tammin Sursok) being gone; her heart beat within Victor for the final time. Y&R spoilers say the topic will shift to Jack’s road trip, so Traci will wonder how that went. Jack will admit he had what he was looking for all along.

At Society, Devon Hamilton (Bryton James) will struggle to process Victor’s demise. He’ll speak with Jill Abbott (Jess Walton) about his upcoming meeting with Amanda Sinclair, the lawyer behind the will contesting. Devon won’t really be worried about it, but Jill will still have concerns. They’ll once again consider the idea that Chance Chancellor could be behind this or perhaps Tucker McCall (Stephen Nichols).

However, Devon ultimately won’t want to get into too much speculation. He’ll shift gears when Jill asks how life’s going for him. Devon will admit things are great, and he won’t see any reason why they won’t keep getting better. Once Devon makes it back home, someone will arrive at the door. Devon will be stunned when he answers it and finds someone who looks just like Hilary Hamilton (Mishael Morgan).

Over with Adam Newman (Mark Grossman), he’ll call Chelsea Newman (Melissa Claire Egan) and leave her a message about wanting to see Connor Newman (Judah Mackey). Chelsea will ignore it and turn her attention to Nick Newman (Joshua Morrow) instead. He’ll insist he believes Adam’s responsible for Victor’s death and add that Connor shouldn’t be around his dad for now.

Afterward, Phyllis Summers (Michelle Stafford) will stop by to see Nick. She’ll mention Victor’s illness, so Nick will assume Adam told her. He’ll argue that he blames Adam for killing Victor and suggest Phyllis could help by providing proof. Phyllis will get agitated as Nick seeks answers about what she knows. The Young and the Restless spoilers say she’ll play dumb and hightail it out of there!

At the ranch, Nikki Newman (Melody Thomas Scott) will accept Paul Williams’ (Doug Davidson) condolences. She’ll insist Paul needs to catch Victor’s killer before pointing the finger at Adam. Summer Newman (Hunter King) will pipe up that Nick believes it as well. Paul won’t be so sure about their accusations, but Nikki will argue that he can’t let Adam get away with murder.

Next, Jack will pop in and give Nick some comfort. He’ll eventually end up at Society, where he’ll toast to Victor. At Crimson Lights, Sharon Newman (Sharon Case) will open up to Mariah Copeland (Camryn Grimes). She’ll confess that she’s worried about Adam, and she won’t be apologetic about it since his father just died. Even so, Sharon will suggest she’s not going to run right over and console Adam.

Soon after, Rey Rosales (Jordi Vilasuso) will get investigation updates from Paul. He’ll learn the Newmans suspect Adam was behind Victor’s death, so he’ll want to arrest Adam if it’s true. Once Adam appears, Rey will let him know he’s sorry about his dad. He’ll point out that Victor’s death was awfully sudden and spark some tense moments. Adam will assure Rey he had nothing to do with Victor’s passing.

Sharon will be floored by Rey’s apparent accusations. She’ll rush off after Adam, who’ll once again deny murdering Victor. Sharon won’t get why Adam’s under suspicion here. He’ll pretend he’s in the dark and suggest he doesn’t know the meaning of a life without Victor. Back with Rey, he’ll get a phone call about Victor’s bloodwork. There were elevated levels of his meds detected, so this is officially a homicide investigation.

A little later, Phyllis will meet up with Chelsea, Summer and Abby Newman (Melissa Ordway) at the Grand Phoenix. Summer will be brought up to speed on Phyllis’ stake in the hotel. However, she’ll end up snapping at Phyllis over her fake sympathy. Summer won’t want that, but Phyllis will assure her daughter she truly wants to support her.

After Summer dashes off, Abby will contend that Phyllis shouldn’t make this all about her. She’ll suggest that no one needs Phyllis, but Phyllis will make it clear that they’re stuck with her. The Young and the Restless spoilers say there’s much more drama to come in Genoa City. We’ll keep you posted as other Y&R details emerge. Stay tuned to the CBS soap and don’t forget to check CDL often for the latest Young and the Restless spoilers, updates and news.