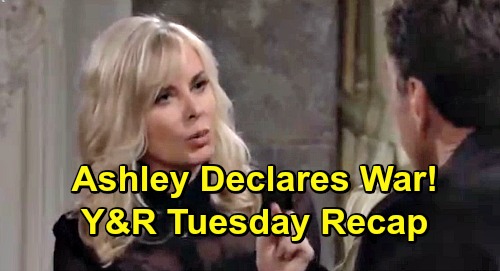 The Young and the Restless (Y&R) spoilers update and recap for Tuesday, April 2, tease that Lauren Baldwin (Tracey E. Bregman) will wish Jack Abbott (Peter Bergman) luck taking on Ashley Abbott (Eileen Davidson). However, she won’t believe he’s made the right call. As a result, Lauren will want to buy back Jabot’s stake in Fenmore’s. Unfortunately, she won’t have the funds to do it yet.

Jack Abbott (Peter Bergman) will contend that his plans for Jabot include Fenmore’s, so he’ll urge Lauren to get back to him when she’s got the money. Afterward, Phyllis Summers (Gina Tognoni) will approach Lauren about running Fenmore’s together. Lauren will seem open to the idea. She’ll later encourage Phyllis to get back in touch when she comes up with the cash.

Lauren will also have a chat with Michael Baldwin (Christian LeBlanc), who’ll promise to do what he can. He’ll admit he hasn’t found a way to break Fenmore’s contract with Jabot yet, but it’s worth another look. Talk will turn to Fenmore “Fen” Baldwin’s (Zach Tinker) music career and the tour he’s still on. Michael just won’t think that’s a solid future for Fen, but Lauren will want to support their son.

Other Young and the Restless spoilers say Ashley will catch up with Abby Newman (Melissa Ordway). After hearing the latest Jabot CEO developments, Ash will stand her ground. She’ll argue that she’s taking over the family company whether Jack approves or not.

Abby will also admit she dumped Arturo Rosales (Jason Canela) and left Dark Horse. That’ll lead to a job offer from Ashley, but Abby will want to stay in Genoa City and focus on her new restaurant. Later, Jack will show up to speak with Ashley. They’ll bicker about which one of them should be Jabot’s leader, but Jack won’t budge. He’ll think they should just stick to their own companies and make this a healthy competition.

Ashley will finally give up and suggest that the battle is on. If it’s a fight Jack wants, it’s a fight he’ll get! At Devon Hamilton’s (Bryton James) penthouse, Elena Dawson (Brytni Sarpy) and Jett Slade (Gilbert Glenn Brown) will make themselves at home. Ana Hamilton (Loren Lott) will sing a song as Jett plays the piano, which will impress both her father and Elena.

At Rey Rosales’ (Jordi Vilasuso) apartment, Devon will stop by to see Lola Rosales (Sasha Calle). He’ll ask if she’s really ready to move forward with the restaurant. Lola will wonder if Devon’s having doubts, but he’ll insist this is about her health. He won’t want Lola to put it in jeopardy for work, but she’ll promise there’ll be no more hospital stints.

Once Devon takes off, Lola will clutch the transplant area in visible pain. It’s clear that she’s pushing herself too hard, so trouble could be brewing. At the coffeehouse, Kyle Abbott (Michael Mealor) will give Summer Abbott (Hunter King) updates on Phyllis being voted out. Afterward, Phyllis will arrive and learn that Summer was Lola’s liver donor. She’ll privately warn Summer that Kyle isn’t trustworthy.

On the patio, Kyle will bump into Lola. She’ll ask why he’s not looking after Summer, so that should bring some awkwardness. Back with Phyllis, she’ll continue her warning to Summer. The new bride will believe Kyle is loyal, but Phyllis won’t be so sure. It’s safe to say Summer won’t be either after she sees Lola and Kyle together. She’ll approach the exes and try to be pleasant, but she’ll still drag Kyle out of there.

At the penthouse again, Elena will discuss her finances with Ana. She won’t be interested in a handout from Jett, Devon or anybody else. Y&R spoilers state that Ana will just hope for friendship. A little later, Devon will be caught off guard when Elena drinks from Hilary Hamilton’s (Mishael Morgan) old mug. He’ll make an effort to move on soon, but will grief get in the way?