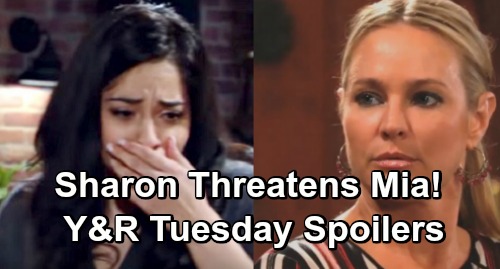 The Young and the Restless (Y&R) spoilers for Tuesday, April 30, tease that Mia Rosales (Noemi Gonzalez) will push Sharon Newman’s (Sharon Case) buttons. They’ll undoubtedly spar over Rey Rosales (Jordi Vilasuso) as usual, but Sharon won’t feel threatened by someone as manipulative and desperate as Mia. She’ll believe Rey has seen Mia’s true colors and won’t be reuniting with her ever again.

Of course, Mia will keep trying to score reactions out of Sharon. She’s the kind of woman who thrives on drama. The more riled she can get Sharon, the better. Any attention seems to be a win in Mia’s book. Y&R spoilers say Sharon will fight back, but only to stand her ground and put Mia in her place. Before she saunters off, Sharon will leave Mia with a stern warning to back off or else

Perhaps Sharon will point out that she knows Mia attacked Lola Rosales (Sasha Calle), so it’d be in her best interest to play nice. Something tells us Mia won’t listen, but she’s the one who’ll ultimately pay the price for that. All Mia’s pot-stirring isn’t going to end well for her since her Young and the Restless exit storyline is already underway.

In the meantime, Billy Abbott (Jason Thompson) will make peace with someone. Things have been tense with Phyllis Summers (Gina Tognoni) lately, so maybe she’ll be the one he turns to on Tuesday. Phyllis basically blackmailed Billy not too long ago, but he may look at this as a chance to break free from the past and make amends for that ill-advised hookup with Summer Abbott (Hunter King).

We know Phyllis will move forward with a new business venture soon, so it sounds like Billy will indeed help make that happen. Since Phyllis was technically single when she “betrayed” Billy with Nick Newman (Joshua Morrow), this seems fair. Billy went to bed with the person who’d hurt Phyllis most and hurt Summer in the process, so he owes his ex one.