BY Heather Hughes on August 12, 2019 | Comments: one comment
Related : Soap Opera, Spoiler, Television, The Young and the Restless 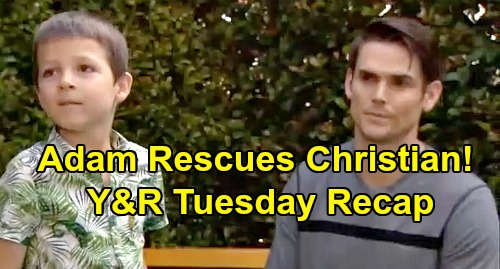 The Young and the Restless (Y&R) spoilers recap for Tuesday, August 13, tease that Lola Rosales (Sasha Calle) will receive a letter from her father, Adrian Rosales. At home, Lola will sit with Rey Rosales (Jordi Vilasuso) as she processes it. She’ll read that Adrian didn’t get back together with Celeste Rosales (Eva LaRue) after all.

Lola will also learn Adrian respects her decision not to let him walk her down the aisle. However, he’d still like to be at the nuptials. Rey will fume over their father’s latest move, but Lola will have reservations about shutting Adrian out. Thanks to this situation with Celeste, Lola’s gotten a taste of what that feels like. Rey will suggest that it’s Lola’s wedding, so it’s her call.

At Devon Hamilton’s (Bryton James) penthouse, Phyllis Summers (Michelle Stafford) will show up to complain. She’ll bicker with Devon about his interest in the Grand Phoenix, but Devon will admit he’s decided not to buy it. Phyllis will offer an alternative; she’ll think Devon should make the purchase and then sell it to her.

Of course, Devon will point out Phyllis doesn’t have the necessary funds. Phyllis will beg Devon to reconsider. She’ll note that she’s seeking redemption through this hotel, which is something Neil Winters (Kristoff St. John) was all about. Devon won’t appreciate Phyllis exploiting his father’s memory, but she’ll backtrack and suggest that wasn’t her intention. Nevertheless, Devon will maintain that the answer is no.

At Nick Newman’s (Joshua Morrow) place, Chelsea Newman (Melissa Claire Egan) will want some answers. She’ll question Anita Lawson (Catherine Bach) about rejecting her million-dollar offer and not showing any interest in the inheritance. Y&R spoilers say Anita will eventually make a confession. She’ll explain Calvin had some shady business dealings, so she kept the profits along with Daryl Tulane (Gordon Thomson).

Chelsea will fume over Anita stealing Calvin’s assets, but Anita will think they were protecting Chelsea by leaving her out of the loop. After Anita admits she got $5 million, Chelsea will kick her out of the house. Afterward, Daryl will drop by with two suitcases and another bag full of money. He’ll contend that Anita wants to make a peace offering.

Daryl will also hand over a different version of Calvin’s will, which leaves Chelsea the storage unit that belonged to Calvin as well as the townhouse and his vehicles. Chelsea will sign the new papers and suggest that Daryl can keep one of the suitcases to share with Anita. Over with Adam Newman (Mark Grossman), he’ll get a text that leaves him fuming. It’ll be more visitation stalling from Victoria Newman (Amelia Heinle).

Adam will head to Victoria and Billy Abbott’s (Jason Thompson) place to gripe soon after. Victoria will insist Christian Newman (Alex Wilson) is sick and sleeping, so Adam will be forced to reschedule. Once Adam takes off, Billy will offer a warning to Victoria. He won’t think Victoria can keep putting Adam off, but she’ll just be grateful for every day Adam doesn’t spend with the kid.

At the park later, Billy and Victoria will take all the kids to play. It won’t be long until Adam arrives and wanders over. Nick will pop up next and try to stop his brother, which will spark more conflict. The Young and the Restless spoilers say Christian will disappear during the chaos, so Victoria and the others will start searching.

Once Adam finds Christian in the bushes, they’ll play soccer until Nick walks over. Adam will call Christian “buddy” and note that he’ll see him later. At Society, Phyllis will do some serious sucking up to Abby Newman (Melissa Ordway). Abby will catch on fast and realize Adam fired Phyllis, so she needs an ally. Phyllis will push Abby to buy the Grand Phoenix herself, so Abby will ultimately agree.

Of course, there’ll be a condition attached. Abby will hint that she may be willing to keep Phyllis on as a manager, but she’ll have to cough up enough for a stake in the hotel. Phyllis will have a week to make it happen!