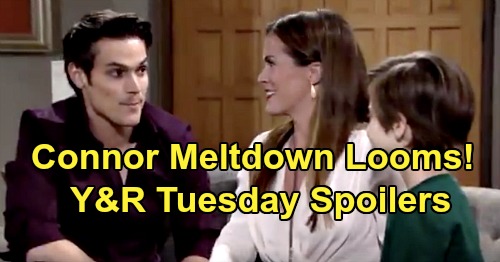 The Young and the Restless (Y&R) spoilers for Tuesday, December 10, tease that Sharon Newman (Sharon Case) will put a plan in motion. There’s no word on what that plan might be, but it’s reasonable to assume it’ll involve Connor Newman (Judah Mackey). Y&R hasn’t let Sharon have much of a life outside of these therapy visits lately.

Connor recently told Sharon that he’d figured out how to keep the monster away. He filled her in on his chant and insisted Sharon didn’t have to come around anymore. Of course, Chelsea Lawson (Melissa Claire Egan) and Adam Newman (Mark Grossman) aren’t convinced the kid’s all better. They want Connor to continue his visits with Sharon, which might be where Sharon plan comes in.

Maybe Sharon will come up with some sort of special project or activity to tackle with Connor. She may hope she can coax Connor into talking again if she revs up the fun. Unfortunately, Connor would rather be stuck to Adam and Chelsea like glue. He wants his parents and only his parents, so he’s not going to be receptive to whatever Sharon suggests.

The Young and the Restless spoilers say Sharon’s strategy will backfire. This plan of hers will bomb big time, so Connor might cause a big scene. It’s easy to imagine Connor throwing a tantrum because he wanted to do this particular activity with Mom and Dad instead.

There’s no guarantee that’s how it’ll play out, but Y&R fans can expect more troubling behavior. Connor is headed down a dark path, so Sharon could find herself in danger down the road. Meanwhile, Nick Newman (Joshua Morrow) will stew over Chelsea’s growing bond with Adam. He’ll hate that Chelsea’s spending night after night at his brother’s penthouse, but he won’t feel like there’s anything he can do.

The Young and the Restless spoilers state that Victor Newman (Eric Braeden) and Nikki Newman (Melody Thomas Scott) will be feeling protective. They may see how much pain Nick is in and worry it’s only going to get worse. Like Phyllis Summers (Michelle Stafford), Nikki and Victor might think Nick should get out before this costs him more than it already has.

Of course, Victor and Nikki may not come right out and say that, but they saw the tension at Thanksgiving. Things are getting worse, not better. Perhaps Nick will get some guidance that leads him to reevaluate his romance.

Nick will definitely get some advice from Victoria Newman (Amelia Heinle) at some point this week. Victoria will feel like Chelsea needs to decide who she’s going to be with. Chelsea can’t keep spending all her time with Adam and stringing Nick along.