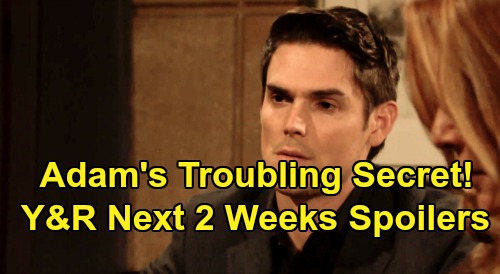 The Young and the Restless (Y&R) spoilers for the next two weeks tease that several Genoa City residents will be cagey. During the week of December 9-13, Amanda Sinclair (Mishael Morgan) will face some scary moments with the person she’s tracking goes off the grid. She’ll worry this apparently dangerous man from her past has found the tracker and destroyed it.

The good news is the tracker will start working again soon after. The bad news is Amanda’s past could still come back to haunt her in a big way. After a conversation with Elena Dawson (Brytni Sarpy), Nate Hastings (Sean Dominic) will decide to have a talk with Devon Hamilton (Bryton James). He’ll feel like Devon’s dealing with far more pain over Amanda’s appearance than he wants to admit.

Devon won’t be willing to divulge much during their discussion, but he’ll at least confess that it’s been hard. Amanda looks just like Hilary Hamilton (Mishael Morgan), so how’s Devon supposed to feel? He’s crazy about Elena, but Hilary was the love of his life. As crazy and complicated as their relationship was, part of Devon will always love and miss Hilary.

The fact that Amanda’s sticking around knowing the toll this is taking will bother Devon. After Nate leaves, Victor Newman (Eric Braeden) will arrive with a special delivery. He’ll offer Devon a dossier, which will offer a few Amanda tidbits that Devon finds suspicious. The Young and the Restless spoilers say Devon will decide to keep digging and figure out what Amanda’s really hiding.

Billy Abbott (Jason Thompson) will also struggle to hide his issues from Victoria Newman (Amelia Heinle). During a chat about an upcoming holiday getaway, Billy will let something slip that bothers Victoria. She’ll realize Billy’s not quite himself, but he’ll explain away his comment and wind up back at the dive bar. Billy will once again ignore Victoria’s attempts to get in touch, so the distance between them will get even worse.

As for Chelsea Lawson (Melissa Claire Egan), she’ll be torn between doing what’s best for Connor Newman (Judah Mackey) and keeping her relationship with Nick Newman (Joshua Morrow) intact. Nick will push Chelsea to move home, so she’ll tell Adam Newman (Mark Grossman) she’s considering it. Adam won’t try to stop Chelsea, but he’ll point out that Connor’s better when they’re all in one place.

Over with “Chance” Chancellor (Donny Boaz) and Abby Newman (Melissa Ordway), Y&R spoilers say their first date will end with a steamy kiss. Chance will mention wanting to do it all night, but it’ll be Abby who makes her move. Looks like fans will have a new Y&R couple in Genoa City!

Later, any lingering tension between Abby and Nate will lift. She’ll be all in on her new romance with Chance, but it’ll be nice to see Nate and Abby become true friends again.

During the week of December 16-20, Chelsea will face difficulties in her new reality. Does that mean a post-breakup reality? Nick may decide Chelsea’s always going to be too close to Adam. If Chelsea can’t make Nick a priority, he may determine that this just can’t work. A potential split could certainly bring some challenges for Chelsea.

As for Adam, he’ll have a secret that troubles him. Will that be the one from Vegas or a new one? Either way, Adam will stay tight-lipped and hope for the best. Back with Devon, his search for the truth could lead to some danger. He’ll want to sink Amanda with what he learns, but he could get caught in the backlash. Will a dangerous ex-lover enter the picture? That seems likely based on all the tracker drama.

Finally, Phyllis Summers (Michelle Stafford) will take a moment to catch up with Jack Abbott (Peter Bergman). She’ll open up to Jack and hopefully gain a new perspective. The Young and the Restless spoilers say the next two weeks will bring some shockers and shakeups. We’ll give you updates as other Y&R details emerge. Stay tuned to the CBS soap and don’t forget to check CDL often for the latest Young and the Restless spoilers, updates and news.