The Young and the Restless Spoilers: Nick Hands Adam A Win – Forces Chelsea To Choose Between Them

BY hellodrdavis on December 8, 2019 | Comments: one comment
Related : Soap Opera, Spoiler, Television, The Young and the Restless 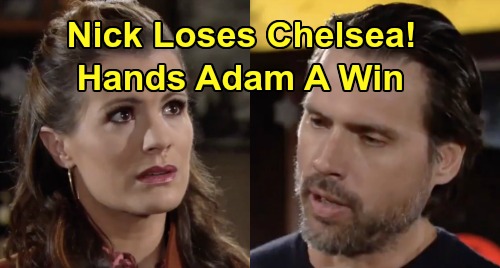 The Young and the Restless spoilers tease that Nick Newman (Joshua Morrow) will soon give Chelsea Lawson (Melissa Claire Egan) a big choice. He’s been completely bent out of shape ever since Connor Newman (Judah Mackey) started having behavioral issues. Of course, Nick would say (and has said) that his problem isn’t with Connor, but that it’s with Adam Newman (Mark Grossman). Nick reluctantly brought Adam back from Las Vegas at Chelsea’s request, and it seems that ever since, his relationship with Chelsea has been in shambles.

As it turns out, there’s a lot going on behind the scenes when it comes to Connor that Nick doesn’t know about. Connor, while he certainly has suffered trauma and has legitimate psychological difficulties, is also actively manipulating the situation so that Chelsea is at Adam’s penthouse 24/7. It remains to be seen whether he really feels that there’s a “monster” inside of him or whether that’s a creative ploy to get his parents together.

At any rate, Connor seems to be doing far more manipulating than Adam is at this point. But Nick is convinced that Adam is using the situation with Connor to draw Chelsea closer to him, and he thinks that Chelsea is falling for it. He doesn’t at all seem to trust Chelsea, who has repeatedly told him that Connor will always be her first priority and that she’s not interested in Adam romantically. But Nick acts like he doesn’t buy that, and he clearly has some serious trust issues with Chelsea.

Of course, Nick is so “in” the drama right now that he doesn’t see the bigger picture – that Chelsea truly loves him and is now being pushed in Adam’s direction by him. All of Nick’s griping and complaining about Adam is causing Chelsea to defend Adam, which then drives Nick into further despair and distrust. It’s a vicious cycle and something will have to give soon.

In fact, it looks like Nick is going to find himself completely fed up with the situation. According to Y&R spoilers, Chelsea will really be struggling with her new reality in the coming days, which is apparently getting grief from Nick every time she’s around him. Nick is shown in the promo for the week of December 9th snippily asking Chelsea if she’s going to live with her ex-husband until her kid goes off to college.

To that, Chelsea looks completely exasperated, and one wonders how long she’s going to tolerate Nick’s complaining. After all, Nick is someone who would do absolutely anything for his own son, yet he can’t seem to understand why Chelsea needs to be there for hers. And from Chelsea’s perspective, she’s got enough to worry about without Nick badgering her about her parenting choices. If Nick’s not careful, he might just drive Chelsea away for good.

And if he and Chelsea do break up, then there’s probably a very good chance that she and Adam will reunite – which means that Nick himself might just hand Adam the win in this situation. Of course, Nick won’t see it that way, but his inability to live without Chelsea while Connor is going through a difficult time is probably going to be the death of his relationship with her, yet he’ll blame everyone but himself for it happening.

At any rate, it looks like Chelsea and Nick are headed straight toward trouble. Do you think that Nick is being unreasonable in his demands on Chelsea? Stay tuned to the CBS soap and don’t forget to check CDL often for the latest Young and the Restless spoilers, updates, and news.