BY Heather Hughes on December 13, 2019 | Comments: one comment
Related : Soap Opera, Spoiler, Television, The Young and the Restless 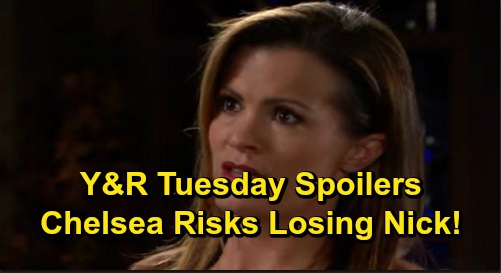 The Young and the Restless (Y&R) spoilers for Tuesday, December 17, tease that Abby Newman (Melissa Ordway) will be downright giddy over her first date with “Chance” Chancellor (Donny Boaz). They’ve done plenty of flirting since Chance came back to town, but this will be their first official night out together. Abby may be a bit nervous – but in a good way. She’ll be buzzing with anticipation of where this romance could lead.

Abby would normally be hesitant to dive in a new relationship, but things seem different with Chance. She’s been crushing hard, so she won’t hold anything back as they try to get to know each other better. The Young and the Restless spoilers say Chance and Abby will realize they have a ton in common. They’ll talk about their family backgrounds and connect over their similarities in Tuesday’s episode.

However, Abby will glad the timing worked out the way it did. She won’t think Chance would’ve liked the “old Abby” very much, but he’ll just be happy their paths have crossed now. After an excellent dinner and some intriguing conversations, their evening will start winding down. Chance will really be smitten at this point, so he’ll admit he’s been wanting to kiss Abby all night.

Y&R spoilers say Abby will also be eager to lock lips, so she’ll grab Chance and plant the smooch he’s seeking. Sparks will keep flying, so Chance and Abby will probably agree to another date soon. In the meantime, Victoria Newman (Amelia Heinle) will catch up with her dad. She’ll have a deep discussion with Victor Newman (Eric Braeden), so perhaps they’ll trade confessions.

Victoria might admit that things are going well with Billy Abbott (Jason Thompson) – at least on the surface. Underneath their seemingly perfect relationship, Victoria may fear there are problems that Billy isn’t willing to divulge. As for Victor, he’ll be dealing with his own issues. Victor is proud of the work Victoria’s doing at Newman Enterprises, but his days undoubtedly feel pretty empty at home.

The Young and the Restless spoilers say Victor will open up to Victoria, so he may confess he’s struggling to find the right path like Billy. Victor can’t quite figure out what he wants to do next, but he may assure Victoria that he loves and supports her. Y&R fans should see some nice father-daughter moments in Friday’s episode.

Finally, Chelsea Newman (Melissa Claire Egan) will put her relationship with Nick Newman (Joshua Morrow) at risk. They’ve been trying to make this work, but it’s getting harder and harder due to Chelsea’s tricky living situation. She can’t seem to tear herself away from Adam Newman’s (Mark Grossman) penthouse, so Nick is having a hard time with that.

The physical distance is creating emotional distance, but Chelsea’s adamant that Connor Newman (Judah Mackey) needs her. There’s nothing more important than her son. Chelsea may suggest that if Nick’s giving her an ultimatum, she’s absolutely going to choose Connor. She might make that crystal clear to Nick and suggest the ball’s actually in his court. He can either be patient or cut her loose, but Connor comes first.