The Young and the Restless Spoilers: Week of December 16-20 – Nick’s Sacrifice for Chelsea – Danger Looms for Billy – Phyllis’ New Scheme 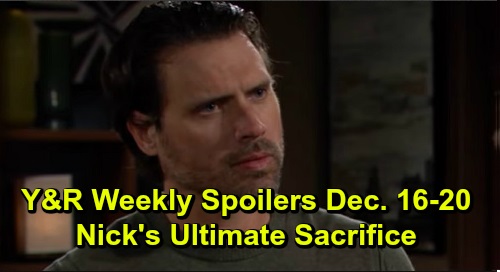 The Young and the Restless (Y&R) spoilers for the week of December 16-20 tease that things are about to heat up in Genoa City. First, let’s talk about some danger for Billy Abbott (Jason Thompson). He’ll find himself drawn to that dive bar again and again, which isn’t great news since it’ll mean more sneaking around.

Billy and Victoria Newman’s (Amelia Heinle) relationship will begin fading fast, so Victor Newman (Eric Braeden) will fret over his daughter’s future. He hates to see Victoria battling heartbreak, but preventing it may be difficult. However, Victor may relate to Billy on some level. Now that Victor’s retired, he’s also facing a tricky time in his life and trying to figure out exactly what’s next.

As for Billy, he’ll keep bonding with Amanda Sinclair (Mishael Morgan) and get caught up in some trouble. Could this storyline end up colliding with Devon Hamilton’s (Bryton James)? The Young and the Restless spoilers say Devon will remain obsessed with Amanda, which will lead to his search for more dirt.

It sounds like Devon will want to blackmail Amanda right out of town, so Billy could get stuck in the mayhem. Amanda’s almost certainly got an abusive ex she’s trying to hide from, and he’s bound to make an appearance at some point. In the meantime, Devon will spar with Elena Dawson (Brytni Sarpy). She’ll find the file Victor delivered on Amanda and call Devon out for keeping her out of the loop.

Devon will suggest maybe Elena deserves better than him. He probably won’t be willing to back off this Amanda issue, so Elena might just have to decide if she’s in or out – if Devon even gives her that choice. An “Elevon” breakup could be brewing if they can’t figure this out. The same goes for Chelsea Lawson (Melissa Claire Egan) and Nick Newman (Joshua Morrow) since their problems will get worse.

Nick will decide to make a sacrifice for Chelsea’s sake, but hasn’t he made enough of those? How much more can Nick take before he gives up? It’s understandable that Chelsea has to concentrate on Connor Newman (Judah Mackey), but that doesn’t mean Nick should stay stuck in limbo forever.

Phyllis Summers (Michelle Stafford) is definitely hoping Nick wises up and lets Chelsea go. Adam Newman (Mark Grossman) seems poised for a reunion with Chelsea eventually, so a “Chick” split would be for the best. We’ll see how long it takes Nick and Chelsea’s relationship to officially implode.

Y&R fans can also expect Phyllis to focus on revenge. She’s furious with Abby Newman (Melissa Ordway) for firing her, so Abby will likely be Phyllis’ next target. After making peace with Nate Hastings (Sean Dominic), Abby will enjoy a lovely date with “Chance” Chancellor (Donny Boaz). She’ll cap off the evening with a kiss and feel good about where this romance is headed.

Naturally, Phyllis could make waves and put that romance in jeopardy. You just can’t be too careful around her! At Jabot, Kyle Abbott (Michael Mealor) may find his new co-CEO arrangement with Jack Abbott (Peter Bergman) isn’t all it’s cracked up to be. Jack will be a bit on the controlling side, so Kyle could get frustrated.

To make matters worse, Kyle will likely be riled by Theo Vanderway’s (Tyler Johnson) Abbott family bonding. Theo will grow closer to Jack and Traci Abbott (Beth Maitland), which could irk Kyle. Lola Abbott (Sasha Calle) will distract herself with some baking, but you can bet there’ll be another Theo debate soon enough.