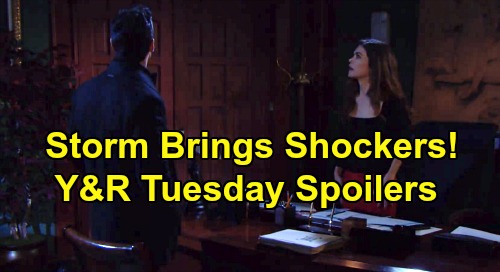 The Young and the Restless (Y&R) spoilers for Tuesday, December 3, tease that Nick Newman (Joshua Morrow) will need someone to lean on. It won’t be Chelsea Lawson (Melissa Claire Egan) since she’ll have packed up and moved in with Adam Newman (Mark Grossman) by then. Chelsea will maintain that it’s for Connor Newman’s (Judah Mackey) sake, but Nick will fear this is the beginning of renewed “Chadam” love.

Nick will confide in an ex on Tuesday. He recently had a nice conversation with Phyllis Summers (Michelle Stafford), and they ended up playing a videogame on their phones. They almost surprised themselves by how much fun they had together. Y&R fans can expect more “Phick” bonding soon enough. Phyllis will listen to Nick’s romantic woes and perhaps offer some advice.

Of course, Phyllis isn’t a big fan of Chelsea. That should come through loud and clear in her upcoming guidance, but she’ll understand that Nick is hurting. It sounds like we’ll see a genuine moment of connection between them. Will this lead to temptation for Nick as Chelsea drifts toward Adam? That’s one possibility to consider as this storyline moves forward.

For now, Nick and Phyllis will find themselves on the same page. There’ll be some common ground to find in Tuesday’s episode. In the meantime, Victoria Newman (Amelia Heinle) will get a visit from Rey Rosales (Jordi Vilasuso). He’ll stop by Newman Enterprises with a goal in mind, so Victoria will wonder what this is all about.

The Young and the Restless spoilers say Victoria will get an apology that catches her off guard. It looks like that’ll come from Rey, who’ll be with Victoria when the storm cuts the lights. Rey may be sorry for all the times he’s had to arrest Victoria, especially since the charges never stuck. They’ll most likely get better acquainted as they wait out the downpour.

Billy Abbott (Jason Thompson) will have a similar idea at a dive bar with Amanda Sinclair (Mishael Morgan). After chatting there in the episode before, the next day will strand them in the storm. Billy will do something dangerous, which could involve his attraction to Amanda. They’ll open up to each other and bond as lost souls in need of something more.

From the sound of things, a few couple shakeups could be brewing! The Young and the Restless spoilers say we’ll at least see some new sparks and signs of trouble, so stay tuned. We’ll give you updates as other Y&R news comes in. Stick with the CBS soap and don’t forget to check CDL often for the latest Young and the Restless spoilers, updates and news.